So got my mill and have learned an awful lot.

My teens put it together with no trouble.

Did a first cut doing the “Longmill” text on a piece of leftover hardwood floor. 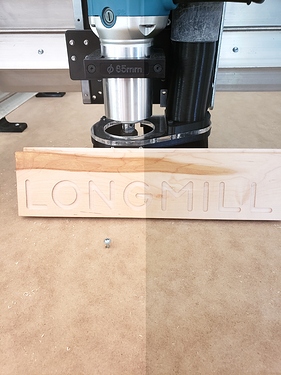 That was kinda cool. Hard maple, cut like butter. Nice.

We have an old house that used to be an old folks’ home with an insulated room with a chiller (my kids call it “the Morgue” and I guess you never know). We’re going to make it our tool room, so we made it a new sign: 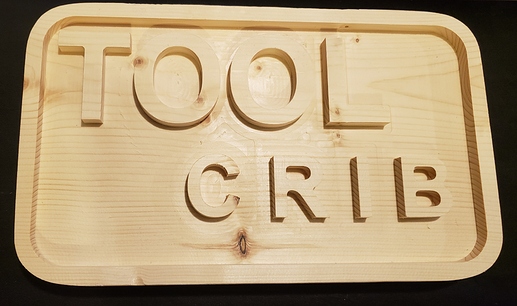 It’s just a leftover chunk of 2x10 joist. I’m still trying to get my head around my toolchain. I did a model in FreeCAD using the Draft workbench, exported as STL. Imported into CamLab and pretty much used the default settings, knowing no better, and piped it over to UGS.

I’m sure a few things can be improved because that thing took 3 hours to carve! About halfway through I found that UGS lets you play with feeds on-the-fly, so I did that - at 24,000 RPM and 1600 feed rate (double the 800 I started with) the machine, router and carbide end mill were as happy as a pig in mud.

But that didn’t really speed it up. The toolpath seemed so random - buzzing over to rough out the top of the “B”, then the first “O”, then a little random pocket in the bottom left corner and the bottom pocket of the “B”… I’m sure it’s just a question of settings but wow.

I’m interested in ideas using canned cycles, and I’m thinking of taking my 3D models and splitting them up into a bunch of discreet STLs or something… I don’t know, would be interesting to hear what others have done to speed the process up

Anyhow, the machine lives and it’s definitely a success, and not a toy - I think we’re going to have a lot of fun with it.

I’d suggest downloading Carbide Create to play with also. The Tool Crib sign would be easy to make in CC with very little effort. You can start off with a 1/4 roughing cut that will hog out the material quickly then come back with either a round bit for the look you have or a v bit for a tapered/pointed look. Both are easy to setup in CC. The downside is CC has no memory of what prior tools have done, so if you start with a 1/4 bit and then go back with an 1/8 bit on the same area, it will generate the entire cut. I work around this by creating ‘zones’ by doing an offset of say .200 around the letters, program the 1/8 bit for that area only and then use the 1/4 bit for things outside of that area.

Fusion 360 is another great tool, but a big learning curve. It will remember what other tools have cut and make the multiple tools easier. You will probably be able to run the CC in an hour or so and F360 will take you a few days to figure out (I already knew Solidworks and it took at least that long for me to get comfortable).

yeah, I played with CC a bit, and then Kiri:Moto. I think KM has a lot of potential and its writer has a good series of videos. Still learning!