Gonna need a tune up I think

I haven’t been too active lately, too much going on. But I have been making stuff, and I usually think “hey, I should post that” at some point in the build.

Anyhow, I’m always trying new stuff and always running into problems… I don’t have enough experience to say if I’m running into the machines limitations or mine, most of the time. I often find a lack of precision in places I don’t expect, or end up doing a ton of post-run cleanup because I didn’t get clean cuts…

Lately I’ve been making some cutting boards as gifts for family, and using my longmill to flatten them after I invariably mess up the glue ups. The problem today is, the longmill is leaving very pronounced tracks during flattening. I usually just flatten a side and use my planer to finish, but today I messed up and made a board that wont fit in the planer. And sanding these lines out of end grain has turned out to be… undesirable.

The machine has always done this. Never bothered me too awful much, didnt seem to matter. Now it does.

So the question is, how can I correct this issue in particular? And further, what other maintenance and tune ups could I be neglecting, possibly causing some of my other gremlins? 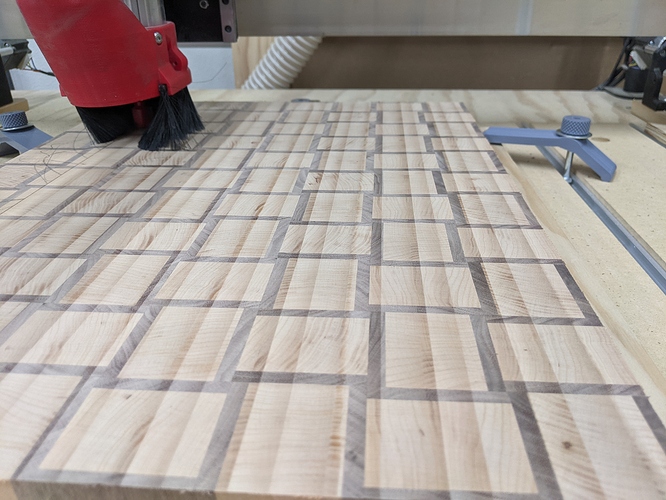 This was the best possible outcome… if I rotate the raster 90* its worse. These lines are faint enough you can barely feel them… maybe a couple thou. But it sticks out like a sore thumb on this end grain and it’s proving difficult to sand out.

I’ve been wondering about this one too. I did find that using smaller “step overs” for the facing operation reduced it a bit. Hoping someone has a more effective solution.

When you’re doing the flattening, are you going back and forth left and right or in one direction only? When you go left to right and switch to the right to left, the direction the bit is turning in relation to the material changes and changes the shade or texture of the cut. Some more advanced software can set up the machine to go left to right, then lift up, go right to left, drop down, and do the next pass. This does reduce the ridges but I don’t think any machine or process can completely eliminate them. From my knowledge, I think Fusion 360 has this option.

Part of the reason why the lines show up is going to be the tram of the router, however, if you can barely feel the lines then it’s likely your tram is pretty good.

So this is back and forth along the y axis. If I do the same thing along the x axis I get much more noticeable lines. If I do an offset toolpath I get a very pronounced diagonal step where the turns overlap.

I have not tried a tighter overlap - this is 80% step over to save time. To my mind less step over = more of the same lines… But heck, I might as well try it.

I don’t think I’ve seen an option in vcarve for single direction cutting, but I’ll take a look tonight. Pretty sure I still have fusion360 installed but I never got far enough in it to start figuring out cam…

Also interested in a response, noticed this when flattening my spoil board (very minimal with MDF).

Could this be related to the bit? I’ve noticed varying designs and styles of surfacing bits, is one better than the others?

On a positive note, a good lesson learned from this project: If you run the bit really fast like you would on a regular surfacing pass (100ipm+) it really tears up the end grain, leaves it rough as hell. Slowing way down to 20ipm and taking super shallow passes solved that. 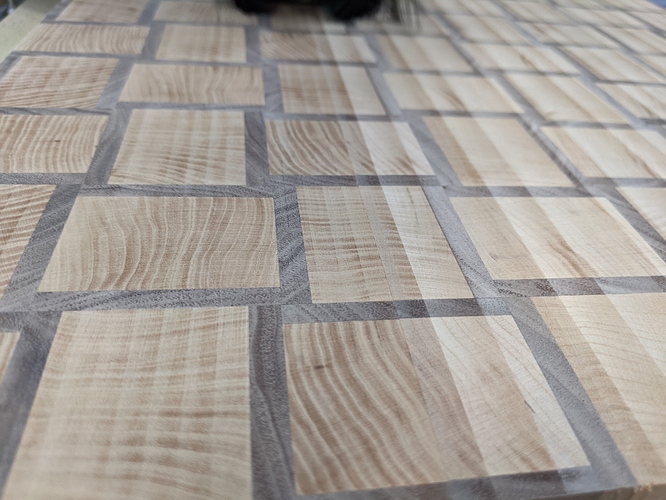 Running it again at 20ipm, 20% step over. Had to manually make a tool path to only climb cut lines in 1 direction.

I can still see the lines faintly, but I can’t feel them at all.

It’s taking forever though. Gonna flip it over and try at least 80% step over, see what happens.

So, I’ll try to stop spamming my own thread, but one further observation: the problem seems to get worse on the right side of the cutting area. My vacuum system is mounted on the left. I’m wondering if it is torqueing the router out of square with the bed… 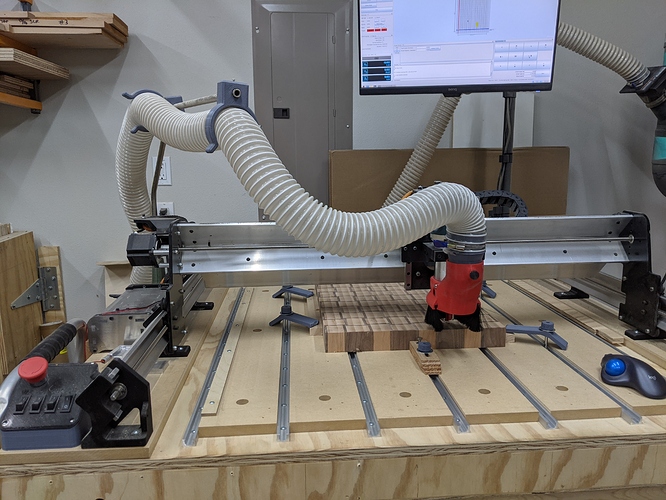 Remember the grain direction of the wood will come in to play. Fusion does have various options for whether you go back and forth or up and down or you only move in one direction, left and start over at the same end each time.

@David What bit are you using? What is your depth of cut?

You may be torquing your router. You have it all the way down in the clamp, resulting in a lot of leverage at the end of the bit, and you are pulling a lot of stiff flex hose attached to the router itself. You may want to try one complete pass with the dust shoe removed and the router raised in the clamp. End grain is never going to be pretty with rotating bit cut, though.