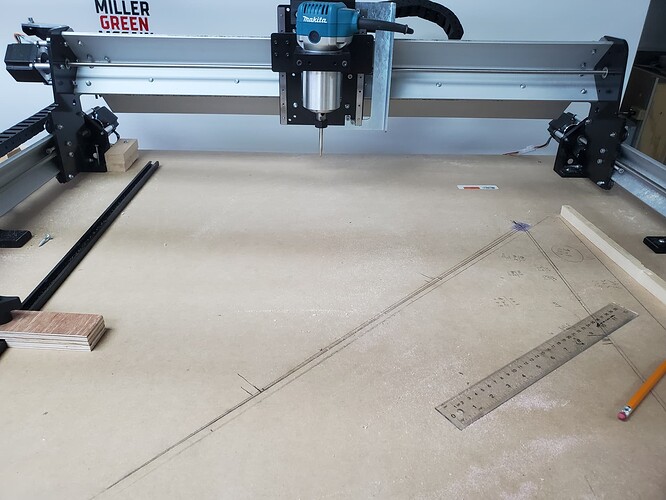 Been having this issue since the start, and it wasn’t a big issue because I was doing small pieces, but now I cannot carve anything at all.

The right side of the Y axis moves faster than the left side. If I jog the machine all the way from Top to Bottom, the right side moves about half an inch faster (or is more forward) than the left. This variance happens almost immediately, and gets progressively worse the more it travels down.

I have re-squared the entire machine again, and also ran the calibration which says I’m square.

Is there something wrong with one of the stepper motors?

Is there some other adjustments?

Anyone else have these problems?

Have reached the frustration phase now, help is appreciated!

@Bizbrar , I have two thoughts: 1) check the anti backlash blocks on both sides of the Y axis. Maybe the left side is too tight? 2) swap the two Y cables at the LM controller and see if the problem switches rails (i.e. Left side faster and right side closer).

If you can turn the Y axis lead screws with little resistance you need to adjust the Y-axis Anti-backlash Nuts. Run the y axis all the way forward till both sides hit the stop then back it off and adjust the Y-axis Anti-backlash Nuts. The lead screws should be difficult to turn by hand.
I find I need to do this now and then. Not sure if that is normal but it’s what I have to do now and then. It solves my problem when ever it happens.

When the backlash is fully screwed in the right position (I understand there may be a variance from machine to machine), but how much (approx) is it from being fully screwed?

Some sort of measurement that I can use to decipher how far to screw the backlash would be a great help.

Essentially, back the screw in the anti backlash block out till you can feel some slop when you try to move the gantry back and forth, then slowly tighten the screw until you take the slop back out and feel no more movement.

Wanted to provide an update. Thanks for everyones suggestions, they are proved to be helpful in this issue but also going forward.

I started by tightening the anti backlash, which were both loose (it was very easy to move both Y with my hands). This unfortunately did not solve the issue, but I am sure helped with overall operation though.

Then I removed both stepper motors on both sides, the side that was moving “faster” was very tight and difficult to remove. The left “slower” side was loose, and came off fairly easily. I swapped the motors just in case, but knew the issue was that the one side was not fully tight, hence when the motor was running it wasn’t able to grasp the rod to turn it.

Thanks for all the help, finally able to have some fun. Learned about many tweaks that need to be made and things to be aware of as I carve.

@Bizbrar It’s good to see that you worked things out.

As the original issue has been resolved, I am closing this thread. Anyone with similar issues should open a new thread so that it will get the attention that it deserves.