Why no shielded cable to steppers?

@gwilki i can’t find the device on any perks list. I’ll take a closer look at it when I get home again.

@gwilki I guess it is an anti-theft device. I did find this on the web. Mystery, and my confusion, solved. 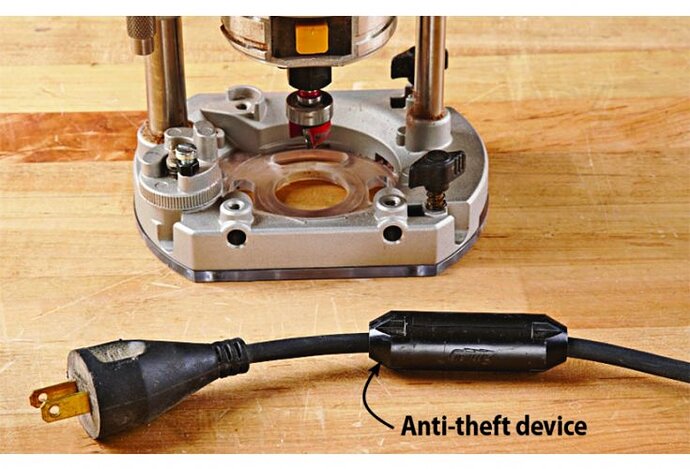 @paullarson Tks much, Paul. It looks like the Makita service guy knows what he is talking about after all.

I am going to keep looking at add-on RFI chokes as I believe that having the router cord and the stepper motor wires in the drag chain could well be a source of some of my problems.

@gwilki they have snap on ferrites on Amazon, but there are no technical details about what frequencies they attenuate. I’m also not sure what frequencies the Makita is generating. I’m guessing the main source of emissions is arcing and sparking from the brushes and not 60HZ.

@paullarson I have learned just enough this morning to know that I know pretty much nothing about this stuff. I just spoke to a guy in California who sells all kinds of chokes. He didn’t try to sell me anything. He explained, though, that, in this area of electronics, “2 + 2” does not necessarily equal 4 because we don’t know what the 2 and the 2 are. He did explain that having the “offending” source, ie. the router power cable, and the cable for the “offended” device running parallel to each other and even touching each other is a big no-no when it comes to RFI interference. I suspect, Paul, that you already knew this, given your past profession.

I think in my case, I am going to start simple and remove the router power cord from the drag chain. It’s simple, it costs nothing and I have nothing to lose by trying. If it solves my freezing issues, then I can decide if I can live with that as a permanent solution, or if I want to try chokes so that I can put the cord back into the drag chain.

@gwilki you are correct, Grant. I have quite a bit of experience, although at a lower voltage printed circuit board level. One of the main ways to reduce/eliminate cross coupling is to minimize parallel run lengths between wires/ lands. So, removing the power cord accomplishes this and will be a good experiment. If noise coupling into the stepper motor cables is your issue, putting ferrite cores on all the stepper motor cables could be a solution. You could use the solid doughnut ones and just temporarily remove the connectors so you could wrap a few turns so a cable through, reinstall the connector and plug back in. One core for each cable. The idea is to keep the noise out of the LM controller. It would still be nice to know what noise frequencies need to be attenuated. We used to have sample kits so you could try different types and find what was needed by trial and error. If this is a problem Sienci could add surface mount ferrite beads on the controller board.

@paullarson Tks, Paul. I believe that the second and third generation of controllers have some form of noise reduction built in, but I’m not sure. I just took the time to remove the router cable from the drag chain - not fun. However, not difficult, just tedious. I’ll see how things work out with my next few jobs. It’s not consistent so it takes a while to see if the latest “solution” really solved anything.

Same with mine and in Canada as well…!

I just checked the Makitas and they have the plastic bead thing.

Also, just to jump in, the newer LongBoards do have additional filtering and noise suppression bits built in to help with reducing the impact of EMI.

From my experience, EMI can cause the Arduino to register a signal where there isn’t one, which causes issues if you have a signal come through the stop button, or through the homing inputs if they are active.

In terms of why we don’t use shielded cable…well it appears that it isn’t a very common practice to begin with so it wasn’t something that when we were designing the electronics that we felt were necessary. I suspect the shielding the cables for the steppers isn’t that common because 1) the voltages and frequencies are low 2) at the level the EMI had to be to affect the motors, you would have other problems crop up. The motor cables carry power to drive the motors, which are in at a high level of current, so they are not sensitve to EMI.

The thing that would be more important to see in my opinion is how the steppers create EMI. If the EMI created by the steppers are causing issues, then shielding the actual part that that is getting affected (the controller) would probably be a lot more effective.

I would also note that there are a bunch of additional wiring that would need to be done to properly sheild the steppers that would add a lot of cost and complexity. Instead, we’ve focused more effort into the circuitry on the signal input sides of the electronics which are the most impacted by EMI.

I would also add that also, quite a few times when we’ve done troubleshooting here, we’ve found that issues aren’t actually coming from EMI but from other reasons so if someone is finding they are having problems with their electronics, I wouldn’t jump straight to EMI issues as well. We don’t have any lab equipment here to do quantifiable EMI testing but we do run vacuums and dust collectors and try to cause all sorts of interference to see if we can get the controller to bonk out, but since we’ve added extra circuitry several generations ago, the boards have been able to work even during these circumstances.

In any case, I would still encourage users to add additional shielding and EMI combatting tools to improve the reliability of their machines since if we find that it helps a lot we definately would look into adding into the systems. We ourselves are continuing to gain experience on electronics design to keep improving the boards, especially by observing how other people use their machines.

I’ve read that power spikes can cause these problems. Such as turning on another device like a dremel or vac after the job is started can cause the cnc to freeze