Controlling gSender with a tablet

New to me controller for gSender.

For quite a while, I had been using a wireless numeric keypad to send the keyboard shortcuts to the Long Mill controller for the gSender functions and for macros that I have written. I first got the idea from @Heyward43. It worked very well, but was limited by the small number of buttons available. I tried a mini keyboard, but putting labels on the very small keys didn’t work and I couldn’t remember the key assignments without labels. (Getting older sucks.)

Recently Kyle Ely did a video as part of his CNC Academy series on options for sending keystroke shortcuts to Vectric software. They looked promising for use with gSender. Two of those options were hardware, and pricey. One was software. Since I had an old tablet gathering dust and a very limited budget, I chose the software route.

Note: The software is capable of much more than what I am using it for. All the details are on Touch-Portal.com.

Using the software involves downloading and installing on a Windows PC or a Mac the Touch Portal software from Touch-Portal.com. From what I have been able to determine, it must be running on the same PC as the one running gSender. (This may be obvious, but I tried to do otherwise anyway. It didn’t work.)

Next the touch portal app must be installed on an android or mac tablet. The free version of the software limits you to about a dozen buttons. I bought the ~$15 dollar Pro version, which gives me unlimited buttons.

I’m attaching a pic of the tablet loaded up. It’s a work in progress but you will get the general idea.

The learning curve for the software is very short. Creating buttons and the shortcuts linked to them is very easy. It’s just a matter of using the shortcuts feature in gSender to assign keyboard shortcuts to the actions in gSender, then linking those same shortcuts to buttons in touch portal. The buttons can be infinitely customized with graphics, text and colours.

I had some initial disconnect issues, but found two things eliminated them. The first was my wife’s idea. So clearly, this was the real solution. :-). It involved the order of opening the applications. Open gSender first. Connect to the Long Mill. Then open Touch Portal. Once it is opened and connected to the table, you will need to make gSender the active window.

The other disconnection problem solution came from Touch Portal’s developer. This one involves eliminating TP’s ability to connect to USB ports. To do this, go to TP’s application folder. Within it, there is an ADP folder. Delete it, close TP and re-start the PC.

I’ve been using this for a couple of weeks and have had no issues at all. I have no way to try it on a Mac and an iPad, though, so if you are using those devices, your mileage may vary. 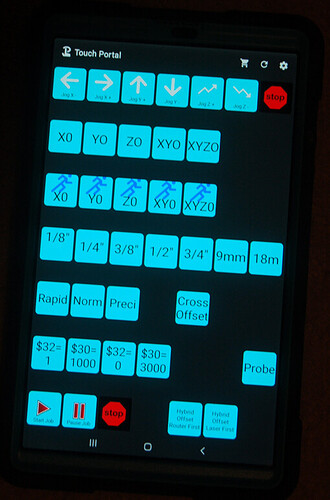 Thank you for this topic, I might need it along the way while adding easier access to my longmill.

The machine is located at the front of my garage, while my cadcam computer is in a separate room in the back. It works, but isn’t the best solution when zeroing the machine. I get my exercise during a day, so to speak.

When it was cold as hell a few weeks back, I couldn’t heat the back office with the heat pump airco anymore, so I created a link between my Oculus Quest VR headset and the cadcam pc in the garage. It enables me to design and run the machine from the living, or virtually anywhere. 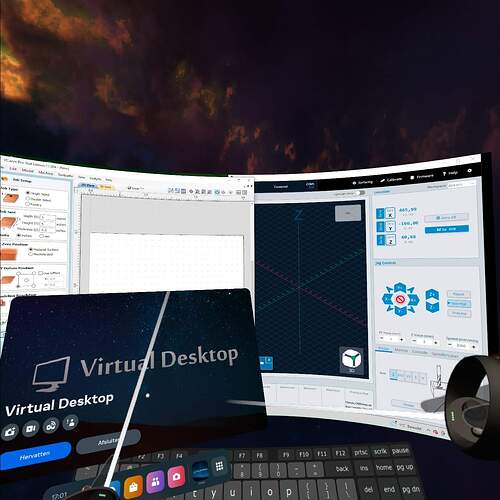 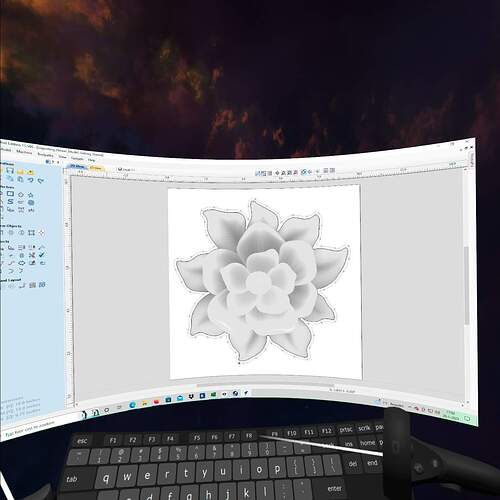 But that still doesn’t fix the exercise problem. In fact, it got worse… So thank you again, now I know it is possible.