Just received my MK2 48 x 30. When I place the collar on Y axis lead screw I can pull it off by hand. I tighten one collar as a test before mounting to the screw and I could slip it on by hand with no resistance. It appears to me that the inside diameter is too large or the cut gap/slot in collar doesn’t allow enough distance to close completely. I stripped the Allen screw head on my test collar trying to get it tight and it’s still loose. I didn’t have this issue with the smaller diameter screw which makes me feel something isn’t right. Anything I can do to fix? 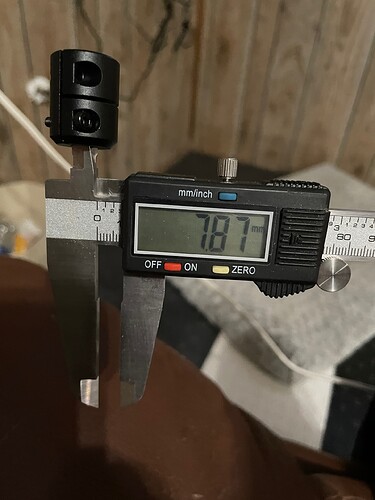 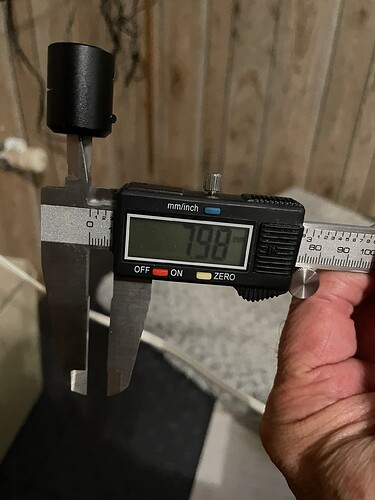 Hello @HarleyMagoo and welcome to the group.

According to the assembly directions the coupler should be 6.35mm x 8mm. Have you checked the diameter of the lead screws? They should be 8mm. Also I can’t tell from the photos if the coupler was tight or loose when you measured.

Covering some bases, I assume that you may have read this from the instructions …

If everything has come together well so far, you should be able to now check that the lead screw can spin relatively easily. If you find that the motor shaft doesn’t fit into the coupler it’s likely that you tightened the motor-side set screw earlier on and have now deformed it. There is a chance for fixing this: take the motor-side set screw out of the coupler and insert anything thin like a box knife, putty knife, or paint scraper into the vertical slot of the coupler. Then screw in the set screw from the opposite side until it hits the inserted object. Rotate it against the object a couple turns to open up the slot again, then back the screw out again, remove the object, and reinsert the screw back to where it should be.

That was the 1st coupler I tried that fell off and was fully tightened down. I measured the screw lead and it was right at 8mm. I would be curious what kinda of tolerance a collar should have on the i.d. When fully tightened? In my case it appear to only have .0.13 mm below the size of the screw lead. Maybe that’s enough to handle the torque. I considered using Teflon tape as a possible solution (that and duct tape is how we do it in Texas). I was thinking maybe I got a bad batch of collars.

Thanks for the reply Andy1 but my problem is the opposite. With the collar removed and tightened as tight as possible it slips all the way to the middle of the collar with ease when inserted on the 8mm screw lead

That trick exists in New Hampshire as well. I didn’t mention it because it shouldn’t be needed.

In my case it appear to only have .0.13 mm below the size of the screw lead. Maybe that’s enough to handle the torque

I don’t know what tolerance it should have but if the 8mm screw was inside the coupler, the coupler would not be able to get smaller than 8mm and would grip tight. At least that’s what I would think but you said it came right off.

Sorry if I’m not much help. I have heard good things about Sienci’s support. If none of them stay tight when installed per the directions I would call them.

I am having the same issue, just received my 48x30 and exact same thing happened. Seems like they definitely sent out a bunch of bad collars. Beyond the tolerance issue with the lead screw, the bolts in the collars are strip easier than anything I’ve seen before, so tightening them down extra tight isn’t possible.

I put in a support request and will post when completed. When I watch the assembly videos on YouTube he’s definitively not struggling to tighten the collars like I am. I did consider using my multi tool to widen the slot cut in the collar but will await the verdict.

Michael I appreciate the help and advice

I had the coupler come off the Z axis. Luckily they sent an extra and changed it out. I had the y come apart at the y axis but was able to fix it. You might be able slide a piece of paper inside to hold it.

Thank you for the reply. I used the ones that had the snuggest fix so I was able to continue the install. When I was jogging the y axis one of the questionable collars slipped and threw the y axis alignment off. I wish the collars had a cotter key or shear pin that allowed a more secure fit. I’m notorious for over tightening thing but something is restricting the collar. Either the id of the collar is too big, the slot in collar that allows it to close isn’t wide enough or the Allen screw is too soft to torque enough. I agree a shim type material would help the fit and I may go that route. Since I reported this to Sienci on Friday I’m hopeful today to find a resolution, they said it was being looked into.

Support contacted me today and will be sending collar replacements I wish these had a set screw in the middle that went into the center of the lead screw but probably some reason they don’t either way glad they responded fairly fast.