Hey everyone, just ordered my 30x30 long mill so now working on building my table and enclosure. My two big things are ventilation and noise reduction. My garage shop borders my master bedroom so if I want to be using this at any hour I need to soundproof the crap out of it but that also presents the heat buildup question.

My idea, (wondering if anyone else has had) is to first build 2 horseshoe enclosures. each box would be lined with sound absorbing foam tiles but there would be a 3-4in gap between the boxes to allow air to freely flow in and out. The horse shoe shape would be closed off at the top by the dust collector and that way its like there are two separate voids, one for air in and one for air out.

My thought process is when you add ports for ventilation you allow that noise to escape. Since the exterior ports for air in and out are on the top, but the interior ports are at the bottom, any noise that is coming out of the interior ports will first have to bounce off the sound foam multiple times in order to make it out of the port at the top, dampening the noise. Where as the air flow in that void will occur fairly easily to keep the unit from over heating.

I would then close off the front and the back with plexiglass doors (to allow tiling) etc. but the main structure would be the horse shoe shape. In my head it works but would love to know if anyone thinks im way off or the air flow wouldn’t really be that great etc. 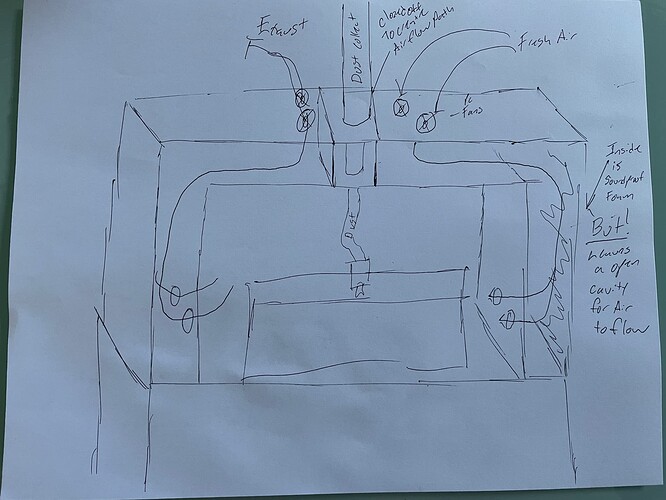 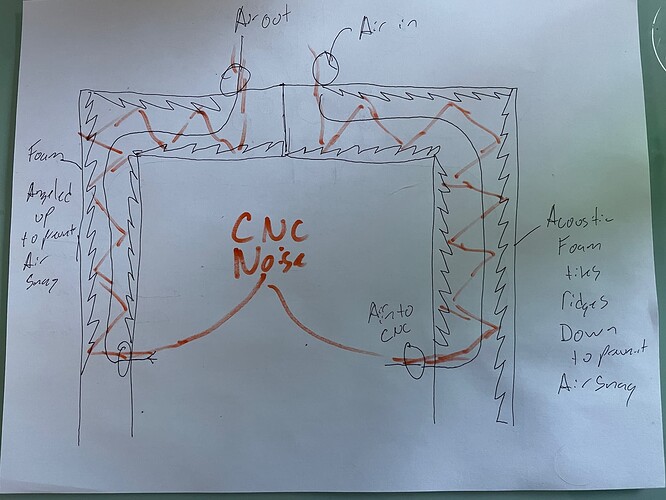 I would also be using the foam acoustic tiles that are in the angles spikes shape. they would be positioned to not create air drag based on the direction of air flow (I know it would be minimal but hey why not factor it) but the spikes would be in the orientation for most acoustical “grab”

One thing to keep in mind is that sound waves travel in straight lines, just as light does. Perhaps, therefore, you could offset the sound-deadening panels from each other and simply leave space between them for air circulation?

As well, your vacuum hose coming in from the top will act as a means of sound propagation upwards and to the ceiling, which is what you’re wanting to limit. A baffle placed above that may mitigate this.

Where is your vacuum cleaner situated in all this, as it, too will be a sound source?

Good luck with all of this and please keep us posted once you figure it all out.

Yes that was the thought in leaving the gap between the two boxes, the sound waves would have a hard time making it all the way through the foam filled void, around 3 90 degree turns out the fan ports on the top.

Very good point with the vac at the top. I have a roof pipe system for my dust extractor, I was actually thinking last night I should just only utilize a shop vac mounted underneath instead. I would still keep a divider at the top just to keep the two voids separate to encourage good airflow but might be bringing the hose up from underneath now

here are some much better mockups better describing my though process.

in addition I decided that underneath in the back I will house my shop vac with dust cyclone (instead of using my 4in ceiling dust collector coming in from the top) to keep the noise down but adequate ventilation I did a similar floor baffle where the air and sound has to snake their way before exiting the enclosure. 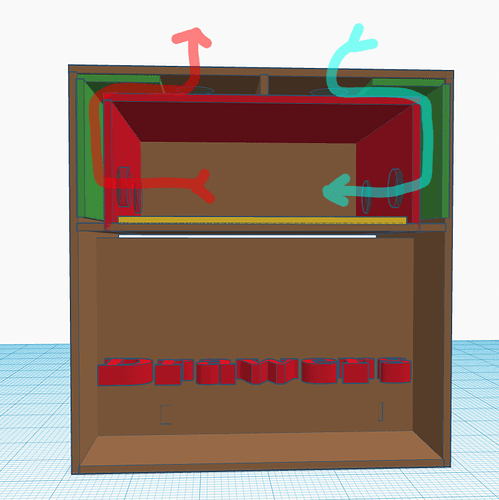 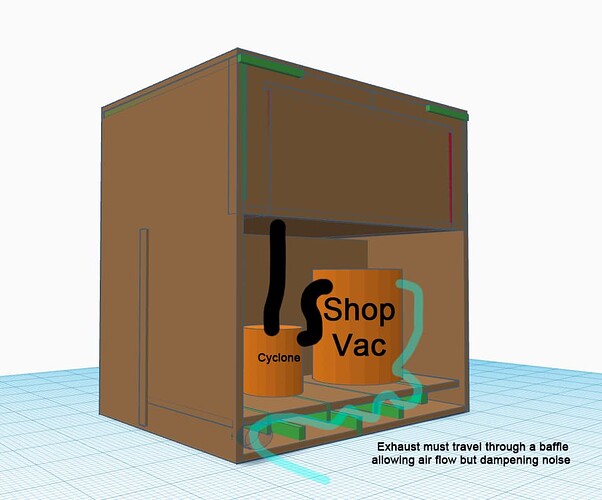