Hey, everyone. I’m doing a fairly complicated (to me…) job, and because it’s been a while since I milled anything important, I decided to do a quick alignment check. Here’s the method I used: 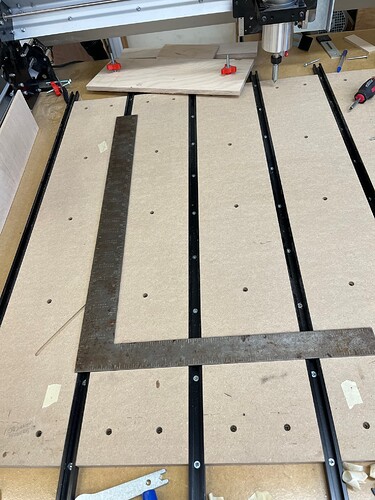 As you can see from the photo, I mounted a router setup bit (basically a turned metal cylinder that comes to a point) in my router, then using gSender, jogged to the lower left home position on my spoilboard. I placed a piece of masking tape beneath the bit, laid a piece of carbon paper over the tape, then lowered the router until the bit just kissed the board deeply enough to make a very precise dot on the tape. 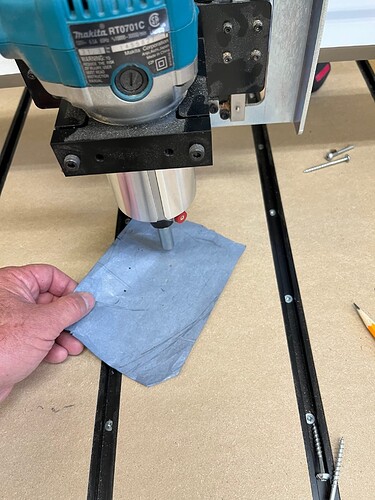 Keeping the X-axis where it was, I raised the bit (using gSender) then moved the gantry backward along the Y-axis until it was abut 20" from the first mark. I marked where that point was.
Keeping the Y-axis where it was, I raised the bit, moved the gantry to the right approximately 14" along the X-axis, then made my 3rd point.
I raised the bit, moved the gantry backwards out of the way, then laid my carpenter’s square over the 3 dots. I realized that my machine was off by quite a bit, so went ahead and loaded gSender’s Alignment program.
In my next post I’ll describe the method I used to align it to within .14mm (according to gSender’s calculation), which was good enough for me.