Here is my first experiment with a Carbide3d MCEtcher Spring Diamond Drag Bit Engraver.
I don’t remember if i used the 90deg or the 120deg bit.
It ended up better than i thought, so i decided to cut the outline later. (Single Flute 1/8 Upcut)
The Source is a detailed outline of the Millennium Falcon (found on Google Image) and i did an Image Trace.

I then purchased a cheap Led Base from Amazon to test it the Edge lit.
The photos are not that great, but you get the idea… 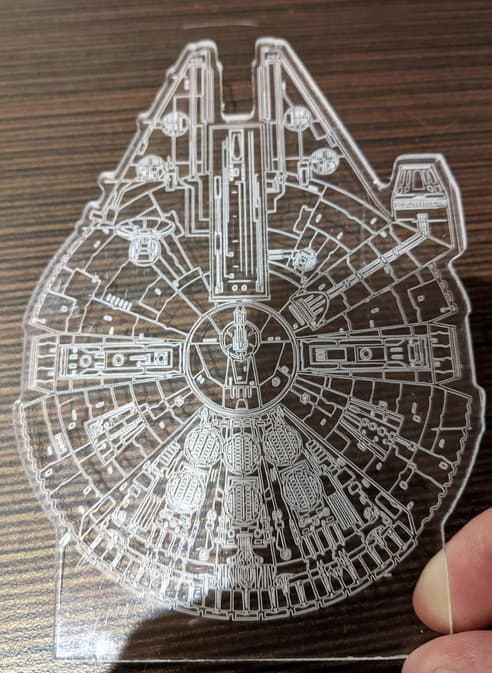 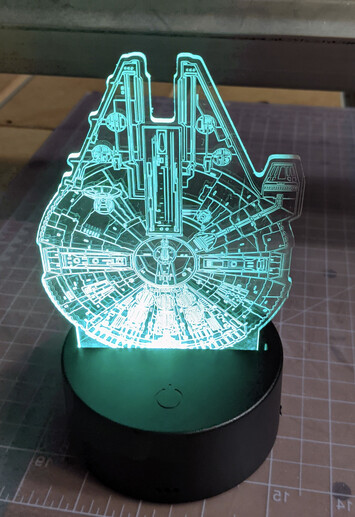 I’m interested in etching acrylic as well, the results you have look great. What plunge and feed rate settings did you use?

Hello!
Here is what i used. It worked, but don’t know if it is optimal.
Plunge Rage=15.0
Feed Rate=45.0
Stepover=0.008
Full Depth=0.05
Depth par pass=0.025 (Second pass made it pop!)
RPM was ZERO = ROUTER OFF
Note that some Bits allow for Power Engraving, not the ones i used.
When i Zeroed, i made sure the Spring was engaged, and that the Retract Height was high enough to clear and that the Spring was released.

webbit_NJ it looks great, what type of acrylic did you use and where did you get it.

This was Overstock from an old project.
I think it was either 1/8 or 3/16 plexi
Bought either at Rona or Home Depot.
Sorry, the purchase was so long ago…