Originally I had hoped to make this a mothers day gift, however due to how busy I’ve been this summer, it had been pushed back. Finally managed to finish it and learn quite a bit in the process. Take a look at the final result! 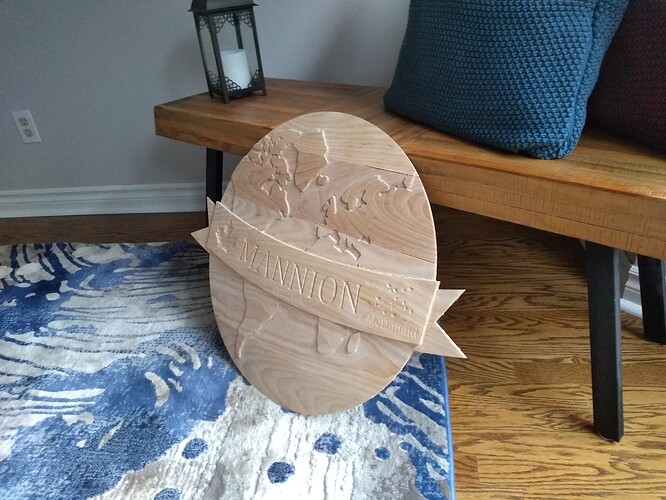 I designed the model and created the tool paths in Fusion360. The image doesn’t do the 3D dome justice, the entire design is wrapped around a section of a sphere (like a globe).

My operation plan for cutting the plaque out began with a roughing pass using the 22mm surfacing bit to hog out most of the material, this took about 10 hours. Afterwards, I stepped down to a 1/4" flat endmill to remove a bit more material to make it easier on the ball nose end mill. In hindsight this step was probably unnecessary. I then used a 90deg. V-bit to engrave the text, followed by the 3/8" ball nose to scallop the stock down to the final model. I had a 2mm step over, but in hindsight, I should have cut that down, really increased the amount of sanding I had to do. Finally, cleaned up the edges and got the finer details using a 1/8" flat end mill.

While cutting it out, I ran into an issue causing my x-axis gantry to jam, leading to an unfortunate gouge right above the “M”. However, if there is one thing that is important in woodworking, its fixing your mistakes, so I hand carved a peg to fit, glued it in place and continued cutting. In the end I should have matched the wood colour a bit better, turned out a bit greyer than the material around it.

So what happened to cause the jam? Well, the screws in the anti-backlash blocks came loose and got stuck in the ways of the machine. First the x-axis screw came out, leading to the unfortunate cut, I didn’t learn my lesson and didn’t check the rest of the screws, and later on the z-axis screw came out. Luckily I heard the jam and was quick enough to stop it before any permanent damage was done. Lesson learned - double check the fasteners on the machine before starting cuts.

Talk about entering with a bang! I really like your piece. Welcome to the forum Kaleb.

@KalebMannion First of all, welcome to the forum! Lots of great people here, and lots of experience. Incredible piece you have carved! You definitely hit the ground running. Keep up the excellent work, and I can’t wait to see what else you create. Again welcome.
Jake 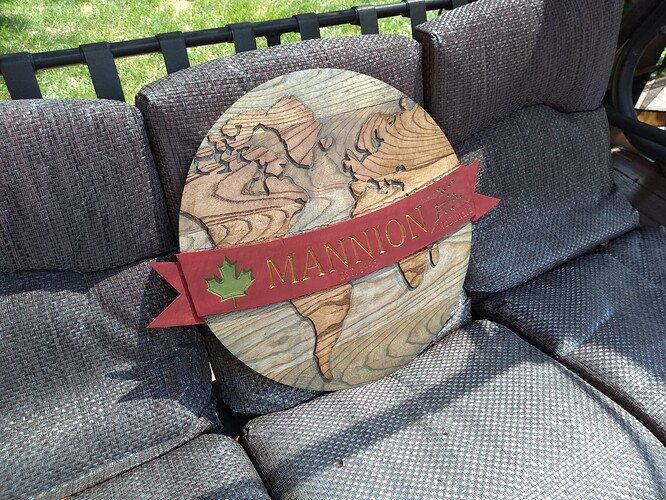 One word @KalebMannion can sum this up………
“Beautiful “. Keep up the great work!
Jake

Love it and then I scrolled down and I really love it. Seeing this and others that have posted pics of their work is helping me get out of this creative funk I’ve been in lately.

Wow, that is one impressive project!!!

You did an amazing job on this. Great save as well when something went wrong!