1.17 includes the following changes on top of those below - this should fix the probing issue for most users.

Thanks for your patience and reports.

New gSender release with a number of feature improvements and fixes.

The surfacing tool has been slightly redesigned and comes with some new features. 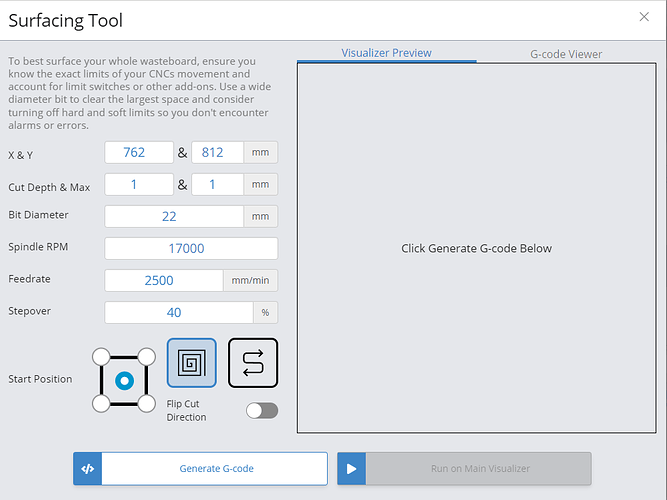 Some feature improvement highlights include:

We’ve rewritten how the visualizer generates and displays toolpaths to result in lower memory usage after parsing. This should be particularly noticeable with larger files - gSender is using less memory by a relatively large factor when visualization is enabled.

As an example, for a 28 megabyte gcode file (~1.5 million lines), these are some comparisons of what the memory values were previously and what they are now:

You should also notice slightly faster visualization due to these changes.

Our benchmarking and profiling has also identified some issues with the library we’re using to parse the toolpaths themselves using excessive amounts of memory. This will be addressed in an upcoming release. We have a relatively long list of performance improvements we plan to address over the next few builds to make sure gSender runs well on lower-hardware spec devices, and this is the first part of that. 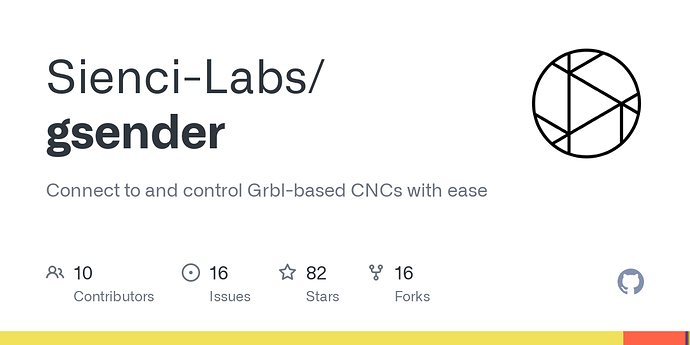 (Pi build coming in the morning)

Hello, is There a reason the GSender GitHub show 1.1.6 as Pre-Release?

Thanks for getting this update out so quickly!

Why the G91 and G90 changes? Makes the max depth report a bit confusing.

G90 is set at the header initially, previous gSender versions did that before as you probably already know. After that, there are a few places that G91 is used now:

Figured using G91 in these instances would make the gcode generation process a bit easier, but as you pointed out there’s some confusion with the max depth report now, can you give me some more details on that?

Hey Walid,
Sorry for the incomplete report/question. I was typing on my phone as I was at the machine about to run a job.
Let me explain.
I understand WHY you choose to use G91, but the Min & Max values on the Job description don’t know the difference. I was trying the surfacing generator (which is awesome, by the way) to clean up surface after an epoxy pour. My plan was to only take off 2mm. When I was about to start the job, I happened to notice that the Min Z height was -4mm. Taking an extra 2mm off would ruin the job. Almost gave up, but then I saw why it was doing this. Even when I understood the WHY, it was a bit nerve racking to run a job that said it would go deeper than I wanted. Of course everything worked as that -4mm was a relative move, but I think you can see the issue.

Thanks for the information, I seem to understand the issue you’re running into now. I appreciate the feedback, ill mark this as a fix we need to make for surfacing. Keep an eye out for the next release it will be there.

So with the surfacing tool would it be possible to put a pause setting input into the wizard (G4 P?) for those of us with spindles that need a few seconds to get up to speed. Also, a g-code editor built into gSender would be helpful for this and other situations.

Since doing an update, I can no longer jog the maching to perform a bit change and zero the new bit. The maching will job if i hold down the jog button, but obviously I cant zero it by doing that. This is making it impossible to run production as I have to close Gsender to get that functioanlity back, and I have to re-home it each time. Causing inaccuracy that is unacceptable. Please advise on how I can go back to a previous version or how I can fix this.

I did send an inquiry to Gsender but have not gotten a response.

@martindg we can look into the pause option, the g-code editor is a much taller order that’s on our list but will take more time to get to

Grab whichever one worked best for you previously and it’ll revert back.

As far as your issue, is the jogging not working with single-clicking the onscreen buttons? Or are you trying to use a keyboard shortcut, joystick, or touchscreen?

I have just started using gSender and prefer it over the previous software that I was using. I had issues with not getting all the buttons to show up with the Edge version so I switched back to 1.1.7. To get the jogging functionality away from the computer, like I was attempting to do with the Edge version, I connected my phone with the shortcuts mapped. 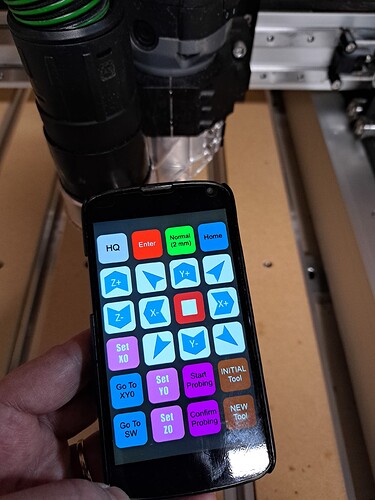 Keep up the good work, really enjoying getting into gSender!

Wow! How’d you do that @spcnc, I like it

I used Macro Deck. I have only got into it this week, just enough to prove it works.

Two of the buttons are shortcuts to macros for tool lengths written by @NeilFerreri (thanks man, these are great!), the rest are just keyboard shortcuts. It’s really nice how many shortcuts gSender allows us to use.

One thing I noticed, the keyboard short for GoTo XY0 goes directly to XY0, but the button on the gSender screen will go up to a safe Z first and then go to XY0. Can the vertical movement be added to the keyboard shortcut option?