How I test that the Mill is square

To check tramming of my Longmill (I needed precision) I do the following:

@saskia Stewart: This is really interesting to me, but a bit confusing. A few questions, if you don’t mind.
The framing square is lying flat on the spoil board with one edge clamped to the t-track and the other running in the direction of the X axis - yes?

I am guessing that is where I am mistaken, as I can’t get my head around how probing for Y0 will tell you if your machine is out wrt to the Z gantry/router not being perpendicular to the waste board in X and Y.

I did not probe for Y0. Using the command G38.2 in the console is important; it is part of a probing routine, but it does not alter the Y value, just stops the carriage at contact. So the Y value is unchanged. This allows you to compare multiple Y values in different positions. Ideally you would get the same Y value for all positions along the framing square.

If you wanted to redefine the Y value to 0 afterwards you would use a command like G10 L20 P1 Y0. BTW To verify (or compensate for) the angle of your framing square just flip it so the part along theT-track points to you instead of away from you.

BTW the brass pipe and blower keep smoke and debris away from the active area; on the right side of the router is a mount for a 7.5W output laser. 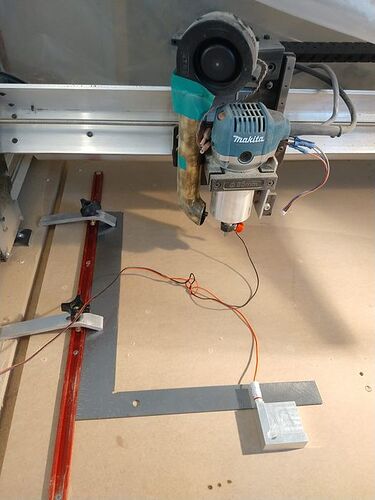 @saskia Tks, Stewart. I misspoke in my post. I have used the G38.2 command before. Where I am still confused is how your setup will show if the bit is perpendicular to the bed. For example, let’s say that the bit is tilted to the right. Y will read the same no matter where you place the touchpad along the square. I believe that must be the case, as the tilt does not vary as you move the X gantry along the Y axis.
What am I missing?

Apologies. I am only interested in the perpendicularity of X and Y. Z is not critical to me. I should have used the term squaring! I am new to much terminology

@saskia No apologies necessary, Stewart. We are all learning as we go along. NOW, your process makes perfect sense to me.
FWIW, several of us here have addressed the perpendicularity (is that a word?) question by boring holes in the spoil board along the X and Y axes. In my case, I used the Mill to drill 6 1/4" holes along the X axis and 6 along the Y. I insert aluminum locator dowels into them when I am carving picture frames to ensure that the frame blank that I have constructed off the Mill lines up exactly square to the X and Y axes of the Mill. I got this idea from @Heyward43 and it works a treat.

I took the liberty of changing the title of your thread, Stewart. I believe that users who are looking for an excellent method to check their Mill for square will be better able to find your solution.