Hi everyone, I got my LaserBeam setup a few months ago now and while it works, I’m having a hard time getting my workflow dialed in. I had been running a “5W” banggood laser for over a year and had my process dialed in. One big piece is that the banggood featured a single button which put the laser in a very low power mode for setting zero.

I am running CNCJS on my longmill from a RPi connected to the USB. When I try to use the software to turn on the laser at the lowest power it still burns my material after a few seconds. 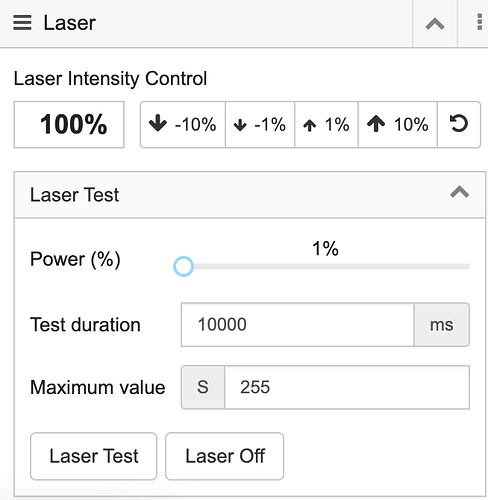 I am using the same S value of 255 in Lightburn, it seems to work … okay. Any advice on this? Do I need to abandon CNCJS? It works super well for CNC tasks and worked pretty well with the old laser, but I am having a hard time using the software for setting zero and damaged an expensive work piece so would like to figure it out. @ikenna.ofoha any advice?

I set my DIP switch to 1 amp for positioning then changed the DIP switch to 4 or 5 and ran the job. Cant remember what power setting I had for the fire button in LightBurn. Also had S Max set to 255.

Hey, you can put dip switch to 1, but you can also raise your $30 amount to by x10 or x100 until you dial in an amount that doesn’t burn your material. When I had $30 set to the stock 30,000 I could only pull 0.5W instead of 7W from the laser and that was at dipswitch 5. Try it out, spread the news if it works for you. Just remember to always change it back to 255 before starting your project

Okay, thanks for this. It feels like changing dip switches for every burn, or manually adjusting those settings, will be a bit disruptive to the workflow. Maybe something to consider for future product updates. It was really nice having a single clickable button on the cheap laser for this. I’d be interested in more opinions if that’s what everyone else is doing to setup each burn. When I’m in production runs I’ll often be doing up to 60 short engraves in a couple hours so these extra steps are a little clunky.

@westsidewood , @ikenna.ofoha - I would agree that a fire button would be easier, but in looking at Ikenna’s post my head was like DUH I never thought of that. I’m not saying DUH to you @westsidewood , but DUH to me.

Sounds like a MACRO situation where you create a “fire button on” to change $30 to whatever works best and then macro changing $30 back to 255 with a “fire button off” .

I’m not up on my gcode, but is there an actual gcode to fire the laser on or off? Or I suppose just use the gSender fire button once the settings are changed.

@stevendq I don’t believe there is a gcode command that will fire the laser. However, as you already figured out, you can write two macros to, in effect, change the power setting to the laser, and then use gS to fire it.