I got my longmill a couple days ago and excitedly put it together. This afternoon after all the tinkering I was finally ready to cnc a simple part. I set up UGS with the recommended probe module settings, used the touch plate and when I hit start everything was working fine, only I was cutting air about 1.5 inches above the piece. Ive triple checked my settings. When I look at the visualizer I see what appears to be the touch plate below the working surface and the probe is at the lower left corner. But when I send it to zero on the table the bit sits at the upper left corner where I assume it should be. Im sure this is an easy fix but it doesn’t seem like anyone else has run into this problem 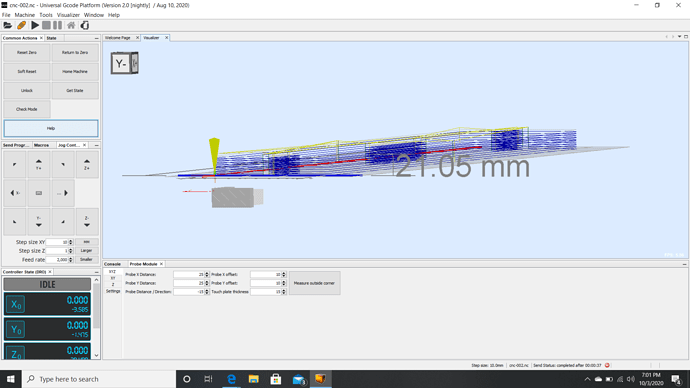 I had this problem too. Mine was because the z could not go low enough and would bottom out and then mess up my z point. So I put a scrap piece under to lift up my work piece and worked fun after that.

Thanks, I’ve been messing with it and it seem like that might work. I’m also having issues with the files I download from camlab dont show the same tool path once its loaded on UGS. It sends the router through my piece on its way to the pocket I need cut, then it will move above the piece to cut back down. Im guessing this has to do with the fact it thinks the touch plate is way below the work surface

I had the bottom out Z issue also. What I did to work on that is to run the z the the bottom, then up 2 mm and then adjusted the router mount so the bit was touching the spoil board. That gave me 2 mm max travel into the spoil board

Will, the origin point you set in camlab is important also. You need to be sure to touchplate to the same corner. It sounds like you might have camlab setup for the lower left corner but teaching the upper left corner of the workpiece. At least that would account for cutting air.

Have you tried making a file in Carbide Create or Fusion 360? I’ve had mixed results with camlab/kiri moto files but consistent luck with CC or F360

I finally got fusion 360 to give me g code that wasn’t “failed” once I brought that over to ugs all seemed to work well. I think I might have been running into issues with bringing my models to cam lab to create g code. I actually was choosing the upper left corner but it would default to lower once it got into ugs for some reason. And it would change my cutting paths as well which I didn’t think could happen.

Now Im having issues with ugs disconnecting from the cnc half way through a cut. It consistently disconnects and I have to start over. If I run the program with no piece its fine, once I’m actually cutting it disconnects and says cant find serial port and wont reconnect without restarting everything. Im not so sure all this is worth the effort…