Hello,
I ran into an issue the other day with the way the power cable is routed for my Makita router - wanted others to see this and be aware so you don’t run into problems.

On my machine with the dust boot installed, I was having an issue where the router power cable, which is sticking out to the right, would get jammed in between the gantries when the X-Z gantry was all the way at the right stop - The picture below shows the cable after I messed with it - but it was actually stuck in between the aluminum extrusion for the dust shoe and the right side Y gantry.

I will probably design something to keep the router cable up and out of the way - just wanted folks to be aware - I saw this when I was cutting out my spoil board, I ended up with a terraced stair-step affect because the machine could not always got all the way to the right, depending if the cable was pinched or not. I was ok since it was MDF but one of the cuts plunged down pretty deep into an uncut section, if it was hardwood, I would have broken a bit for sure. 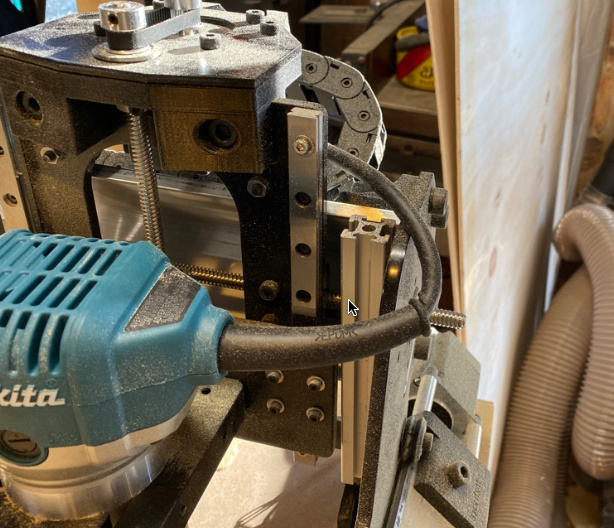 It’s interesting that you would bring this up. I don’t yet have my Long Mill, but did get to help a buddy some time ago set up a hobbyist CNC, using a router similar to the Makita. He had a problem similar to yours. Our solution was to trim back the strain relief on the cord, so that we could have the cord make a tighter bend than it could originally. Since the cord does not move relative to the router in this configuration, there was no danger of the reduced strain relief weakening the cord. So far, after many months, all is well.

Good idea - The router does move up and down in Z, but that movement is minimal. I’ll look into that as a solution, as I think its actually the simplest thing to do.

Mike: I don’t have my Long Mill yet, so I’m not up close and personal as to how the router and z axis mechanisms tie together. Looking at your picture, I wonder if we couldn’t pass wire tie through one of the empty holes that I see just to the right of the router, and use it to tie off the cable. Would that keep the cable out of the way and still allow the z to move smoothly?

gwilki, those aren’t holes. There are screws in there holding the guides to the back plate. Almost a good idea. I’m looking for a solution also since I noticed a similar situation testing after assembly.

GregsReinventions Not sure I am following you there I have the router wire going through the drag chain on my machine - how are you suggesting to route the wire?

Ok Mine is facing the same side as yours. I took it toward the front of the machine and around to the left side of the router. Then into the drag chain. Does that help? I haven’t had mine get pinch against the end plate at all.

Got it, that makes sense. Thanks for the clarification!