Hello everyone! I know Grant already graced y’all with a release thread, but I’m now announcing it officially myself

gSender 1.0 is now available for free to anyone who wants it!

This means that gSender is now completed it’s BETA phase and we’ve now become confident enough to declare our first reliable version. We’re really excited to see more people begin to use it as we’ve now got a whole swath of great features and about 2000 users using it to run jobs every day.

Some things that you can expect from gSender in its current state:

This has now been about a year in the making. The team and I are very excited that we’ve reached this point. We set out to make our very own open-source and FREE g-code sender after gaining inspiration from some of the other commonly available options and realizing that there were some improvements we felt could make them even better for LongMill users and other hobby CNCers. Obviously a really big thanks go out to the Alpha and BETA testers who have been involved and helped bring gSender to it’s current point

We want gSender to be the next-level open-source sender that’s available for all green CNCers to turn to whether they own a LongMill or otherwise: guided and easy to approach as a beginner yet customizable and feature-rich for higher-tier hobby CNCers. This is why, even though we’ll be taking a quick breather after release of 1.0, we’ll still be working toward even more features into the coming future. Some of these will include:

We left these off to the side ‘till now since we know that many of them would be more appealing to the more advanced users, but we’re confident that with everything currently built-in it’ll satisfy the vast majority of y’all. You all know that we’ll keep going on this until we feel we’ve made the best sender we can

I’ll move Grant’s post over to here since he already graciously covered the new features and fixes of 1.0.0.

Have a great Tuesday everybody!

Here is the link to the latest version of gSender 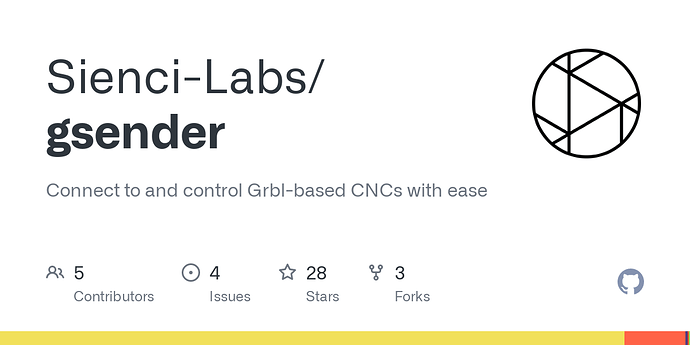 FYI, none of these versions ever ran gSender after the installation was completed with that box checked. All of them started fine with the Windows 10 shortcut, though.

Nitpicking, I still don’t like the way that the data entry enforces its limits. For instance, if the Jog Control Move step for Normal mode needs to be edited from “0.02” to “0.04” then one might use backspace to get rid of the “2” and add the “4”. However, as soon as the data entry input determines that “0.0” is not an acceptable value, it reverts data entry to “0.001”, which one must now deal with if aware of the change (or you will end up with “0.0014”.)

I just used gsender for the first time today, v1. Installed my limit sensors, flashed the firmware, all seems to work fine.

Only strange behavior was I selected a file to mess with that was a rather large, I told gsender to trace and it immediately locked the machine with two errors, either of which it would show me. Finally found the errors in the console, about the soft limits, turns out my workspace zero was too far over for the project to fit. It would have been slick if I could have acknowledged the errors, and not had to disconnect the machine which was the o key way I could clear it. It would also be slick if it indicated the axis of the soft limit that was in error.

Other than that I think it is pretty awesome, excited to run a project on this vs UGS. I love having a homing capability and setting workspace zeros is super helpful as well!