I came to CNC via the Maslow CNC, which uses a frame (easel) design to support a 4x8 workpiece at a 15 degree angle from vertical. When I saw the video @chrismakesstuff posted of milling vertically I was sold and placed my order for the Longmill. I see he did a similar demo at a wood working show in the past few weeks.

How viable is it to keep the Longmill in a near vertical orientation for regular use in the shop? I’d rather not give up the floor space to a table for it if I could build a near vertical frame and operate that way. Is anyone else considering this?

Interested in buying, but have some questions
GregsReinventions November 13, 2019, 1:12am #2

Very viable. One caveat to that is if you are going to do through cuts on it attach a cable or small rope on each side of the gantry. Run that up to 2 pulleys to help the stepper motors and anti backlash nuts from extra wear. It will run fine without it but parts would wear out prematurely. We set this up at the Hamilton show this past weekend. 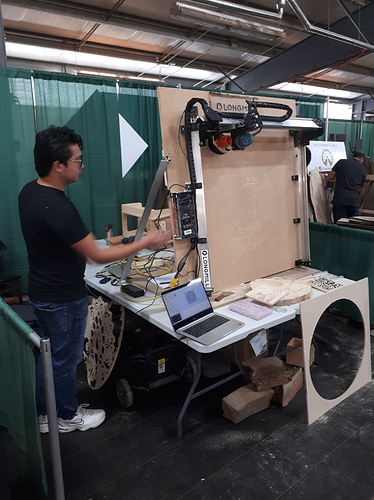 @GregsReinventions Thanks for the feedback. Is it likely to suffer any accuracy issues in this orientation or is the only concern that things may wear more?

In terms of wear, is it just general load being higher over time? I’m guessing the MTBF on these motors is years and years?

I’m guessing that for more aggressive cuts it also means a penalty of some level since the motor is using more juice to overcome gravity as well as the direction of travel & cut resistance?

There is no problems with accuracy its just the possibility of extra wear on the stepper motors and the anti backlash nuts. I forgot the mention put 10 pounds of weight on each side to counterbalance the weight of the gantry on the motors. That is the only concern about having it in the orientation at this time. Sienci Labs are testing it now to see how the unit will be affected over time. I will suspect that the guys will chime in here to fill in gaps that I may have missed. But I think I have covered most of the points I have talked with them about.

There will be no challenge to this unit in that position. One thing we did notice is parts that were being cut out all the way through say a piece of plywood can get jammed in between the bit and the wood and cause a problem with the machine jamming. So you have to use tabs on all cut outs.

I’m going to link this thread to another much longer one which has plenty more information regarding vertical cutting on the LongMill:

Vertical milling, but with horizontal orientation so you can side load long pieces Machine Support & Info

@chrismakesstuff I was inspired to order by your YouTube video showing the vertical milling potential of the Longmill. I’m not starting to build mine and I’ve been thinking long and hard about whether or not to table top mount it or wall mount it vertically. I only have a two car garage so wall mounting it is definitely winning out at this point. The one thing I won’t be able to do with the vertical mount is end grain joinery, but I plan to be able to lift it down and put it on a temporary ta…