Well, I have made three attempts at carving a Mt St Helens relief. So far, three failures, all associated with doing the needed file loads (three) and bit changes (one).

The last attempt, I at least got through the second pass with the 1.5mm radius tapered ball mill. However, GSender locked up its display at a 2% completion level. It continued to feed and run the GCode file to the end, but the display locked up my X, Y, Z position display and would not let me return the cutter to its zero position for the final finishing pass. So there are 1/4" end mill lines still visible in certain parts. The photos show the three attempts and the last attempt soaking in walnut oil for depth enhancement.

I should have never used this as my very first milling project. But I have learned a lot on the way.

I may try this one more time, but GSender has to not lockup when milling a 26MB file. 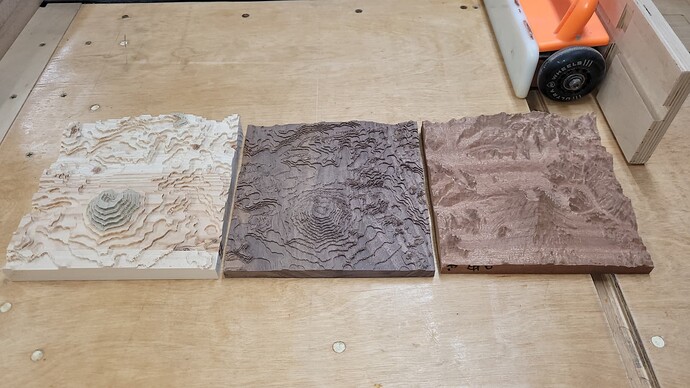 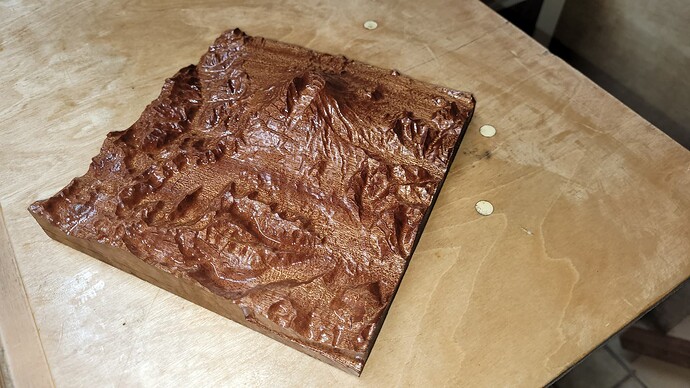 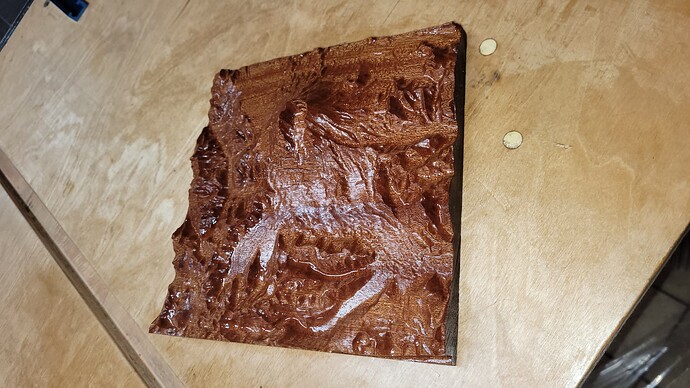 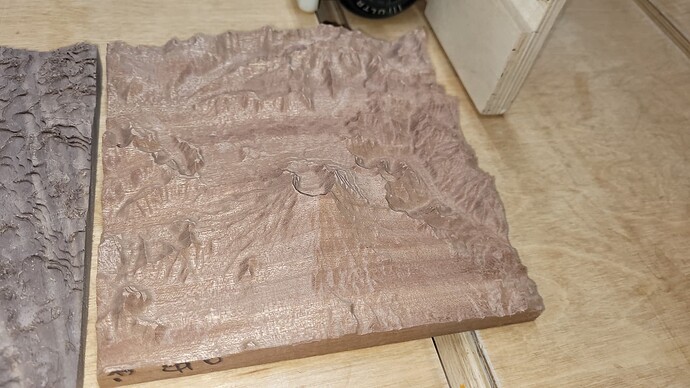 @Scottinharwood I can truly sympathize, Scott. I’ve been there too many times when I was using UGS. Even with all your issues, the final products really looks good. What CAD/CAM software did you use? I’m curious, too, why the finishing pass was done in two passes. In VCarve, the finishing tool path is always one pass, so I’m interested in how other software operates.

I will make sure that your issues is brought to the attention of the gurus at Sienci.

@Scottinharwood Scott: Please confirm what version of gSender you are running.

The version I was running this morning was 0.6.9 at the mill. At my other computer, not attached to the mill, I have the 0.7 release.

I used the USGS survey NED data to form the model and used CAMLAB to create the GCode files.

If I had to guess, its a memory bleed problem with inadequate data buffering. A 26+MB file being pushed to an 8-bit board requires lots of buffer space. I think GSender is trying to do the milling animation and buffering at the same time and the amount of data to buffer for the fine small movements caused the user interface to freeze, but allowed the actual GCode sender part to keep going. it was interesting to see the displayt freez at 2% done and the controls locked out even after I pressed the Stop function selection. As an after thought, I should have tried to go to the console and do a direct X=0, Y=0, Z=0 before I closed the software, sad to say.

At the mill, I am also running GSender on a laptop with Windows 10 in 64 bit mode and have the power saving features all turned off so the laptop stays running and I do not get the annoying Windows updates.

@Scottinharwood Tks, Scott. I’ll pass this along to the guys at Sienci. They may have addressed this issue in .7.1.

Hey Scott, I wanted to follow up on your post here since in the past couple versions we’ve gotten gSender to run lighter and more reliably (at least in testing on our end). Have you noticed any improvements yourself with the newest 0.7.3 for example?