I hit my first major road block today, and it’s a real bummer since I was going to make some gifts to hand out this afternoon.

Every time I run a job, it stops sending gcode part way through at some random point. On ugs classic, nothing seems to change except it’s not sending any more code. Everything works in the program, so it’s not just locked up.

On ugs platform it does the same thing, except in the coordinates window it shows offline. However, in the top bar it still shows connected. I can click thru the windows, but the machine won’t do anything until I disconnect and reconnect.

Since I can’t find a way to continue from where the job stopped, this has made it impossible to run even a 5 minute job.

I saw a couple similar posts here that never seemed to get resolved. Any input is appreciated. The best I can think to do right now is to try a Windows machine, which I don’t have right now, or try a different gcode sender.

John was having this issue, I don’t recall his username (edit: @coogle) . I was talking with him and he mentioned that it was actually an issue with the serial communication of UGS. Maybe he can add in a bit more on this, but for now I just have some screenshots of the conversation he and I were having

Yes in the UGS settings under “Sending” there should be a way to change the serial drivers. Make sure it’s set to JSSC as I have had zero issues with that. Apparently on RPi the default java serial library is buggy.

Man, I hate Linux. I found a guide for “fixing” the issues ugs has with raspbian. I made the change you guys suggested, and switched video drivers which is supposed to fix the visualizer. Now the screen resolution is messed up on the pi touchscreen, which took me forever to fix with the default drivers.

Good news, though, it ran the job successfully! I think the visualizer problem will wait for another day - I think I still have time to bang out some Christmas presents.

Thanks for the pointers, guys.

Can’t help you with the screen if you are using the touchscreen. I used a regular monitor and HDMI port and got the visualizer working great. Glad the sending is fixed tho I was about ready to burn my garage down out of frustration and a solid week of banging my head trying to fix that problem.

First batch of stupid inside jokes for my team at work complete. 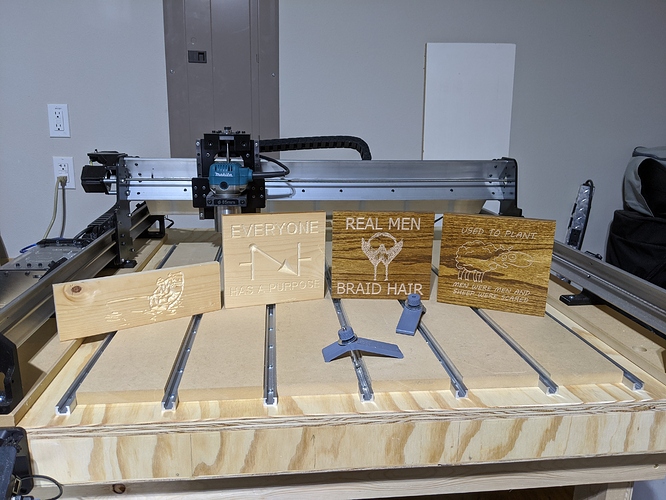 I was starting to think that we had made the wrong decision going with a raspberry Pi. kept losing connection to UGS… Found your post, Thanks so much!!! Ran about 380,000 instructions today with no disconnects!!