Wish me luck! My build 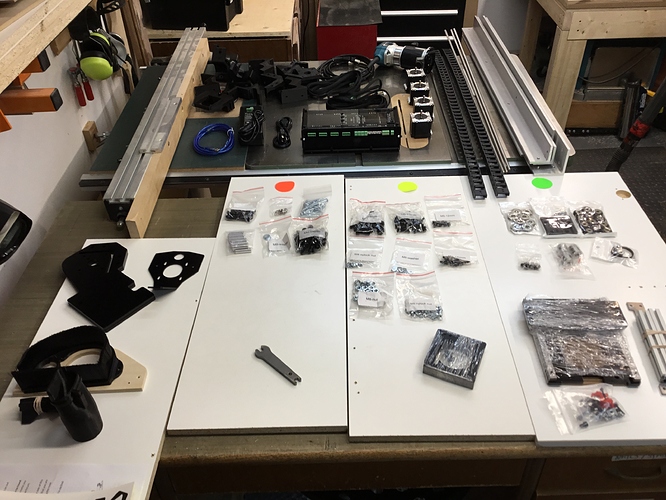 Good luck, Jim. You’ll do fine, I’m sure. There are plenty of good people here to help you along the way, if you need it.

Yes, a lot of people have already helped my by their posts. Thank you.

I only put mine together this week and I have to say I quite enjoyed it. @chrismakesstuff did a really good job on the video (if you go that route, instead of just the web docs) and he’s quite enjoyable to listen to. I found the whole thing relatively calming. One suggestion - if you have a wife or friend who can help with putting the XZ axis on to the Y rails, I would recommend it. Chris manages it quite elegantly in the video but I went a more conservative route and it was still a bit of work.

Enjoy and keep us posted!
-Jeff

Thanks Jeff. Hope to have it running by lunch today. I was able to mount the XZ axis on the y axis by bringing my xz to front of table and put the y’s through from behind. And moved the xz back as I fed y’s through. Pretty simple, but I do have a deeper table 49”. Full width of 4 x 8 mdf sheet. Overall size is 51 x 49.

Good job. I wish I had then double checked all the tensions on wheels and motors and couplers etc. Chris does mention it in the video but enthusiasm got the best of me and I ended up having to go back multiple times to fix it all. Hopefully you won’t have those issues. Looking forward to seeing your first project.

Still struggling with my tensions. Was doing some of the PPE facemask frames today and during the final drilling operation at the ends of the head band my two Y axis got materially out of alignment. It happened consistently in the same spot in the file (the very end operation). I reset the Y’s by running them all the way to the rear and the carefully checked and re-tightened the wheels. I think it has resolved the issue but I’m starting to get frustrated with the constant need to adjust it. I wish I knew what I was doing wrong relative to others, as the problem seems to be down to me, near as I can tell.

We’ll see how long things work from here. If not I am going to need to re-watch all the tuning details in slow-mo to try and understand what I’ve got wrong.

@jwoody18 Jeff: I struggled with the wheel tension for a couple of weeks, bordering on paranoia, I think. It finally occurred to me that the problem was not so much with the tension up and down, but sideways. So, I unscrewed the feet on the Y axis rails, shifted everything about 1/2" inch so that the screws would not land in the same holes, and followed the instructions again to align things while screwing the Mill down. You don’t need to be out much before, at some point in their travel, the Y axis wheels are being either “stretched” between the two Y rails or “compressed” between them. For me, this meant that, when adjusting them, at some point in their travel, I could turn them with difficulty by hand and at other points, I could not. Realigning the Y rails solved the issue for me.

@gwilki I think you just hit the nail on the head. I think my problem is coming from a particular area mid-run on one of my Y rails. I’m going to take your suggestion and unscrew it all and move it over a bit so I have fresh MDF to screw in to, and carefully remount it. Great suggestion. I failed to see the bigger picture that it could be the parallelness of the rails, not just the wheel settings. Nice one.

@jwoody18 Don’t thank me yet, Jeff. It may not solve your problem.

Just finished resetting the machine on the board, very carefully, and re-tensioning the v-wheels. That was a PITA but I seem to have it correct, except for one wheel that is damaged (waiting on some spare parts that are enroute). Z-axis seems fine. Unfortunately, my work area marking is now incorrect, but that’s not the end of the world for a new build. Eventually I’ll need to replace it anyway… Surfacing will clear that up anyway for the most part, once that bit arrives with the v-wheel. We’ll see how I get on from here now.