After mounting the Y-axis gantries to the XZ rail and taking measurements with my precision engineer square, I noted that no matter how I bolted things together (and I tried various bolting sequences…) the right side gantry was not aligned at 90 degrees (as viewed from the front) to the rail. I believe this is mostly due to the somewhat imprecisely-bent steel L brackets. 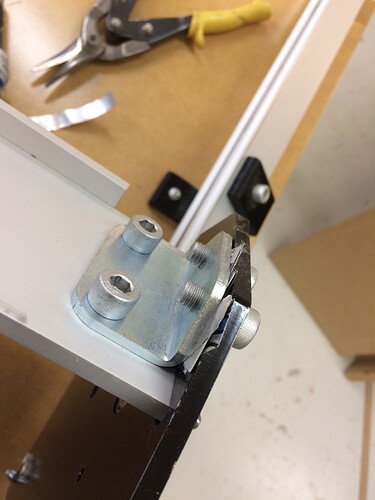 To fix this problem, I did what I have found works for setting up all my other machines: shim between the parts that need to be moved further apart. 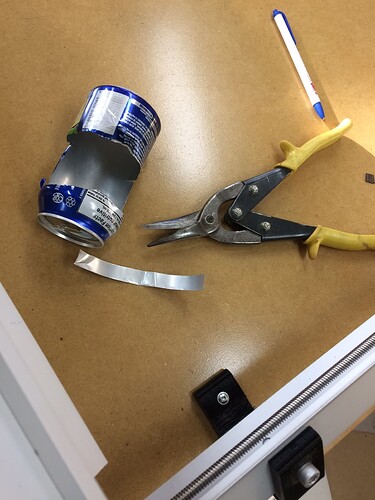 Because the commercial shim material I have is too thin, I elected to make my own. As you can see, it’s something that you’ll probably have on hand: a pop tin. Just cut yourself a strip, then use as many layers as necessary. How’s that for a simple fix?

I might try this. I have same problem but on both sides which caused rear v-wheels to pull in and up. I used extra washer on each rear excentric nut and that aligned the wheels. I figured if the discrepancy was static (zero is still zero) this wouldn’t affect accuracy of cuts but I don’t know that for sure.

Never thought of this and I’ve had a similar problem.

I’ve already decided to abandon the V-Wheels though and aluminum extrusions in favor of steel ones, and welding a flat bar to the open end with a slot to allow access to the lead screw and as to not block it. The top and bottom get linear rails mounted to them.

I believe this will dramatically improve my speeds and rigidity and with the new models being made from steel already, I don’t think that adding linear rails for about an extra $200 would really hurt prospective sales. I think this is a change that should be made to the router, because V Wheels are just not that good and are also consumables.

I’m not experienced enough to gander a response about the aluminum vrs steel rails issue you’re raising. It woud appear that you have precision milling equipment at your disposal, or else you wouldn’t even be thinking of swapping them out. From my perspective, the delrin V-wheels aren’t such an Achilles Heel. Yes, they’re a consumable commodity, but so what? I mean, how often are you having to replace them now? Of course it all depends on hours of use, but as I’m no longer running a woodworking business, I’m happy with how it’s all working out for me.
Please keep us in the loop af this all plays out.