In another thread, a member mentioned that the back lash nuts on his Y axes had been damaged because the long cap screws were the first thing to hit the end of the Y axes rails when the Mill is moved to its furthest forward position.
If the cap screws were to be replaced by the shorter set screws, the metal part of the gantry would hit the stops.
I’ve not had that problem, but figured that I could make a very small modification to the Mill so that I would not need to think about it.
I’m attaching two pics that show that I cut two pieces of plastic starboard and attached each with one screw through the delrin rail clamp. Now, when the Mill is moved to the furthest it can go in Y, the cap screws on the backlash nuts travel past the plastic bumpers and the metal parts of the gantries hit them.
This may well be overkill, but as I had the plastic and the time, it cost me nothing. 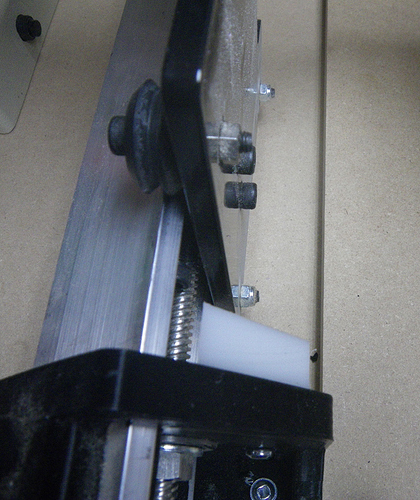 good idea. Maybe if someone has time that end rail mount could get a minor redesign to the 3d printed part to have a hole for the screws to go into to stop that problem as well.