Hey Folks, I’m having an issue where as I hit play in UGS, the Z axis plunges to the full depth of the model, 50ish mm in this case, then tries to rapid over to the start point, then retracts, then plunges again, then retracts, and finally starts the actual adaptive toolpath and helixes down into the piece.

I’m using fusion 360, the simulation doesn’t show this, happening, nor does UGS, until you hit play, then you see the yellow cone plunge and move towards the starting position. This has happened on all my jobs I’ve attempted, and I’m brand new to this so hopefully it’s something obvious to a more experienced user. I’ve attached a slighlty simplified version of the gcode which produces the same result.
Thanks in advance, and sorry this is my first post so let me know what other info I should include.

I took a brief look at your G-code using https://ncviewer.com/. The first thing it does is move the Z axis to 0 (Z0 command). Then it moves to where it’s going to start carving and moves the Z axis to 15 above the work surface (Z15). This seems like the safe retract height, but I don’t know why it happens after the move. Then it moves back down and begins carving.
So, first question. Did you set the zero axis 0 point at the top of the work surface and how did you do it? If you set it correctly the bit should have stopped at the surface of the work piece when it did the first plunge, probably still not a good thing, but better than plunging through.
Maybe you set your reference wrong in Fusion? You can set it to the top of the work piece surface or to the bottom. Maybe you set it to the bottom?

Have you used Fusion 360 before? It is very powerful and also very complex. It works completely different than other programs, like Vcarve or Carbide Create. In Fusion 360 you end up with solid models and F360 determines depths of cuts for you. In the others you basically never get past the F360 sketch stage (i.e. 2D design) and then move into the tool path stage where you define the depths of cut. You might want to start out with Carbide Create. It’s pretty simple and it’s free.

@zoltan What is this supposed to be, Aaron? What post processor are you using in Fusion? The gcode looks a bit weird to me, as it is sending Z moves while going back and forth between G90 absolute and G91 incremental. I would think that is why you are seeing the retracts and plunges.

As Paul said, Fusion is quite complicate and beyond my meagre talents for sure. I agree with Paul that you may want to start out with something a bit for user friendly.

This sounds to me like your ‘safe retract’ setting is wrong. It defaults to ‘G28’ with grbl post in Fusion 360 and this has a behaviour like what you describe. If you edit the setup for your NC program, you can change the default there: 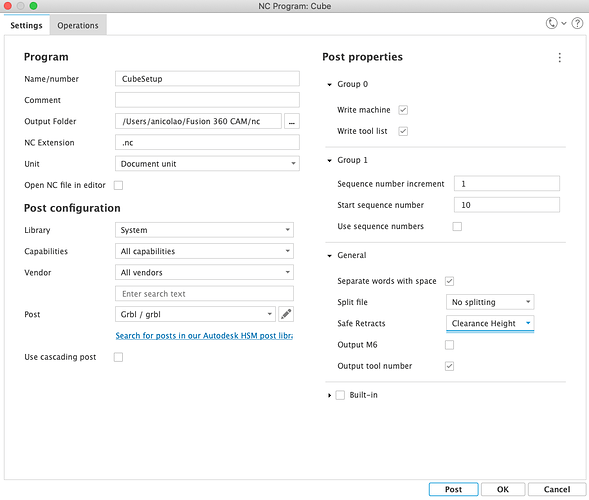 This presumes you generate your nc files as programs in your tree in fusion; if you generate them by right clicking on the toolpath the properties look different and are hidden under a twisty: 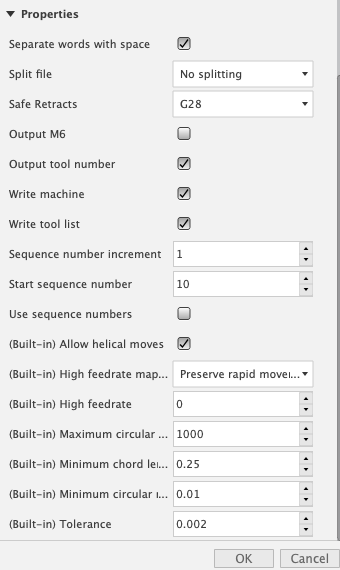 I realized only later you’d attached your gcode which to my mind proves my hypothesis on line 10:
G28 G91 Z0

Thank you for the reply Paul, that got me to look into G-code more and I found out a lot of what all that means now. Zero axis was set using the bit setter that came with the Longmill. This is my first go at fusion, I dabbled in autocad when it hit windows in the 90s but never got very far as I didn’t have a $250k for a machine as a teenager! Things have changed! I’ve played with CC a bit, and I agree, it is quite different in determining toolpaths and such. Nothing that a few good youtube tutorials won’t solve though!

As far as youtube videos for learning Fusion I like “Learn Fusion or Die Trying.” It helped me a lot.

It’s a hangboard for rockclimbing training. I was just using the stock post processor in fusion, then after Pauls reply, I asked google different questions and downloaded the openbuilds one. I now understand and see the unwanted z move at the start, and just edited the G-code intially, but that would get tiresome. Thankfully @anicolao had the answer for me. Now all is running smooth and it is outputting what I want.

Fusion definitely seemed intimidating, and still does, but youtube has helped me through many designs already. I still get stuck occasionally but, that’s learning! Pretty wild what these machines are capable of!

Thank you, I’ll check that channel out! Always looking for more resources. Lars Christensen, NYCCNC, and Product Design Online have popped up the most and have helped a bit.

Thank you very much @anicolao That helped me stop destroying pieces upon pressing play! SO much to learn!