Does anyone have a script/site/method for easily adding dogbones to inside corners of an svg?

@ryanprice What CAD/CAM software are you using?

Typically I use illustrator and carbide create to create my files. I saw vetric has a plug-in for making boxes but I’m on Mac and looking to avoid switching to windows every time I need to cut a box

@ryanprice Likely, others will have some thoughts on this, Ryan. In VCarvePro, it’s easy to add dog bones to a design, but they are added to vectors, not to the imported svg file.

Mac user here. Are you importing your .ai files as exported .svg files into CC? Which version of CC are you using. I stopped using it around version 4. Version 7 may have a direct method of allocating dogbone corners… and even earlier versions may have that feature but I never used it.

As an important aside, C3D required that all imported .svg files had a resolution set to96dpi. I questioned it with C3D because a vector file is resolution independent. It turns out that CC expects all .svg files to have a 96dpi resolution. This assumes great importance if you want your created design sizes to transfer into CC correctly.

e.g. For creating a dogbone feature on a rectangle, I just add a circle centred on each corner of the rectangle. Select everything and just use the boolean operation of union to create the shape. It required ten seconds to create the example shown below. I use Affinity Designer for all of my 2D drawings, and it is a very suitable analogue for Illustrator.

The first image shows a rectangle with four circles overlaid and centred at each corner vertex. 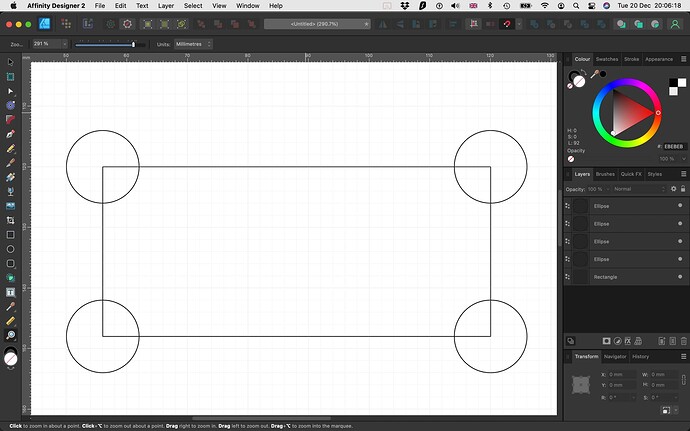 The second image shows the rectangle after selecting everything and applying the boolean operation, union. 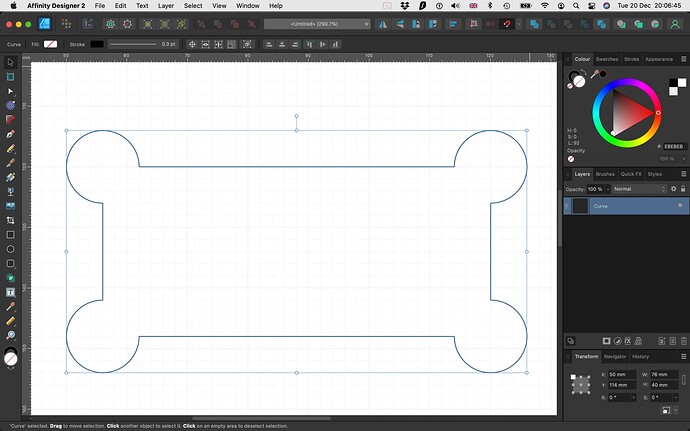 I thought about adding the “bones” the same way you did but it would be a few dozen points and I figured there’s gotta be an easier way!

Carbide Create does have the ability to add dogbones in V6, which is the last version that allows an export of the Gcode file without a PRO license or owning a C3D machine. For V7, the only ways to extract the Gcode, besides buying a Pro license, is to use Carbide Motion with a C3D machine or log into a C3D web page that will do the extraction. C3D decided that they were giving too much free support to non-C3D customers and put the Gcode file into their design file, compressed and encrypted.

I thought about adding the “bones” the same way you did but it would be a few dozen points and I figured there’s gotta be an easier way!

I agree that the process is needlessly tedious but if you have only say… 50 holes to apply, it could probably be done in ten minutes. If you pixel align your design to the grid in Illustrator, you can drop the circles anywhere and know that they will align with the vertices correctly. Good luck!

I have no idea about CC 7 and its capabilities but CC have moved away from providing a free software with limited capabilities, to a free software that can do very little. The cost of the ‘pro’ software would mandate at least following standard design conventions. You may have some success with Easel, which is an online software over at Inventables, that may work for you. I like its interface but it is quite simplistic in its non-pro model.

I never could spend the time with Fusion 360 nor did I like Sketchup. Other software like Siemens NX are completely beyond my pocket and my hobbyist needs. I have just started working with Shapr3D which I like a lot and this may be my future of 3D design, but it has an annual cost. It can run on an iPad too and although mine is modestly specced, it works well. (Apple Pencil v.1 required) I also use CarvecoMaker (Bootcamp) for my tool path creation needs. There are some specifically Mac creative software for CNC but it requires a bit of cash to get going.

Much of my toolpath generation is 2D/2.5D so my Illustrator look-alike works very well for me right now. I try to follow the simple design principle of CAD (only draw an object once then reflect it to create the whole design) but my graphic design knowledge often means I can knock my designs up in Affinity Designer really fast. I have also tried Blender but the learning curve is too steep for my 74 year old brain.

Carbide Create does have the ability to add dogbones in V6, which is the last version that allows an export of the Gcode file without a PRO license or owning a C3D machine.

Thanks for the information. Useful to know but I found the C3D approach to software was needlessly unconventional.

C3D decided that they were giving too much free support to non-C3D customers and put the Gcode file into their design file, compressed and encrypted.

It’s one point of view. I suspect that creating a closed system is quite likely to drive potential customers away rather than attract them. Personal CNC at the hobbyist level needs the support of manufacturers and people prepared to encourage the hobbyists.

My opinion is that too much arcane knowledge is not shared with prospective customers while the holy grail of sales is chased. It is frequently the case that (only after the buyer has bought the wrong machine and been badly advised in the forums which attract newbies to that manufacturer) the buyer realizes their costly mistake.

Can you add dog bones to an imported svg? If so, how? I could only add them to built in shapes

@jepho, I wan’t trying to give excuses for C3D, just trying to state the facts. I don’t disagree with you, but I do know that C3D claims they were spending quite a lot of time doing support for the free version of Carbide Create for uses of non-C3D machines. Several users gave some alternate suggestions of how they could handle this, but this is the direction, good or bad, they have chosen.

@ryanprice, you are correct that you can only add dog bones to build-in shapes. Adding to an imported SVG would require adding manually.

I wan’t trying to give excuses for C3D, just trying to state the facts.

Yes, I understood that and I was not trying to belittle you or impugn your perspective. When first using CC in a much earlier iteration, I asked many questions both in the forums and privately to support. Inexplicably, so much was left unanswered. I concluded then that free software is never going to be an attractive proposition. Especially where the developer has other paying customers to support.

The provision of CC was a great effort and possibly it got many people started in the hobby of CNC woodworking. I assume that it was born from decent intentions. Sadly, it did not have the requisite time devoted to it and displayed many software faults that spoiled the desire to use it as my goto CAM software. CC was free and capable of being used to write the carving code for a large number of 8bit GRBL driven machines. It was bound to be used by many people (not C3D customers) who wanted CAM software. Many web pages (which were unrelated to C3D) pointed to the download pages of CC.

The free version of CC was always doomed to become a piece of abandonware with limited functionality. It always had limited facilities and was quite likely to disappoint the new user attempting to learn CNC and progress quickly. CC was also hobbled in a manner to get the user to subscribe to the pro version. That method of opening new vistas to the prospective user is a cheap trick.

My current CAM software has several price points but the testing which I was permitted before buying into the software was unlimited. I could explore every feature of each software price point up to and including the premium package at $7,995. This meant I understood what the software could do for me. I was able to choose an option freely and did not feel bulldozed into buying something I did not need.

Sure, we all like free stuff but ultimately, you get what you pay for. The lack of development of CC showed in the iterations with which I am familiar… v3, v4 and v5. I think the free version of CC stole the time that could have been more usefully spent on the pro version and its progeny (MeshCAM). I thought that C3D was attempting to juggle too many balls. The development and implementation of the free CC software… in any moment that could be spared for it, resulted in eternally faulty and disappointing software.