Default to P1 after every stop

Is there a way to have G-Sender NOT default back to P1 every time it stops? It just adds complications and screw-ups. I had multiple pieces of the same item to run, and every time it completed one piece, it reverted back to P1, which kind of defeats the point of having multiple job memories. When I forget to look at the memory, and I click on go to XY0, it went to the home position, which then triggers the alarm from the sensors. When the alarm gets triggered it reverts back to P1 (again, adding to screw-ups and waste of time). If I pick a job memory number, it would be good to stay there until I say I’m done, and if I forget, it’s on me. Thanks! 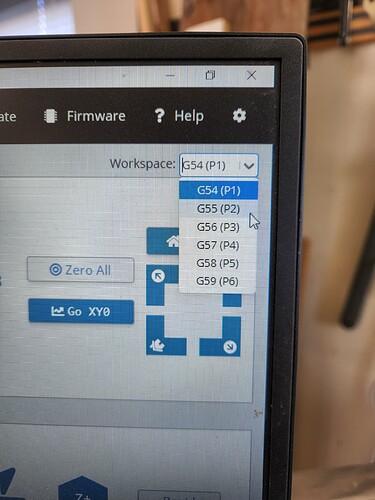 @aringer - Adi, check out this post - Zeroing nuisance - confirmation first? - #5 by KGN - and look down near the end. I think they explain the situation very well. Looks like there is a partial fix for the next release and a condition on which commands are used to “end” the job. Check it out to see if the info helps.

As Heyward mentioned gSender doesn’t reset your workspace on job completion, it’s most likely a M2 command (Program stop) in your gcode at the end which resets GRBL to the default state. His linked post has a workaround, or you can remove the M2 from your file.

If you’re uncomfortable with editing files/G-Code in general, I would recommend using the start/stop block workaround Heyward linked.

@aringer What post processor have you set VCarve to use? You should be using either grbl in or grbl mm.