I notice that none of the table builds that have been posted include an Emergency Stop Button. Consider that you have a 1+ HP motor running at 18,000 RPM with a sharp tool at the end and you do not have direct control of it. It is never a good idea to count on a computer/electronic cutoff as a safety. It’s easy to wire an E-Stop into the cable feeding the receptacles into which the router and LongBoard are plugged and mount it right on the front of the enclosure or table.

Also, the general rules for working around rotating equipment apply - don’t wear long sleeves, don’t wear gloves, do wear safety glasses, and do wear hearing protection. I’ve watched so many YouTube videos in which the operator is moving around the spinning bit with a vac hose or adjusting the clamps and could easily get cut or caught up in the bit. The fact that the router is moving relatively slowly doesn’t matter. It will still hurt.

Finally, there are also numerous videos of the disasters that can happen when a CNC router is left unattended. In one a clamp comes loose, the stock moves and jams the router, and the friction from the bit on the wood starts a fire. At the very least, and probably not sufficient, use a video camera, or DroidCam, to monitor the router.

Enjoy your LongMill. Please be careful.

Good advise. I’ve only done a few test cuts on my machine and I’ve already chewed up two clamps and learned the hard way an e-stop would be handy. Always check your zero before you hit start.

My e-stop project is in progress, and I started a thread. I’ll be posting all my files and links to the stuff I use as I go.

I’d also recommend having a fire extinguisher nearby. I don’t, but it’s been on my to-do list for a while now.

Also, learn how to use it. It’s not as intuitive as you might think if you’ve never practiced.

If you have everything plugged into a power bar you have an E stop right there. The off switch on the power bar. My router the machine and my laptop are all plugged in right there. I hit that button everything stops. Everyone over thinks this stuff for some reason. If you only want the cnc and router to stop only plug those into it. Hit that switch its all off one hit.

You’re right, thats probably enough to get by. But there’s a reason the big red mushroom switch is ubiquitous on industrial machinery. When something goes sideways, you don’t want to go looking for the switch.

The other day when I crashed the LongMill into the bed because I didn’t check zero, I stopped it with the stop button on the controller. The controller is right there. I knew where the switch was. It worked out. But I still spent a second or two looking for the switch. Luckily, I didn’t ruin any of my t-track, or hit a bolt, or send a broken bit flying. But it could have.

With a proper e-stop, I would have been faster.

You get used to it and even I forget to check the zeroing of the bit once in a while. Forget to hit reset 0 in the UGS. That causes all kinds of excitement. Usually even by the time you reach for even an emergency stop its too late to save the bit anyway. Its snapped in a few seconds because of ID 10 T error right?

Another point you should not be walking away from the cnc while its running anyway. Too many things can happen and cause unperceived problems. You need to be there watching it or at least within ear shot incase something goes wrong.

When it comes to my safety and minimizing equipment damage, I don’t want to just get by. I want to do it the way industry and experience have shown to be the best. That’s why there are two and sometimes three E-stops on equipment. Why gamble? To save the cost of a switch?

While we are at it, let’s install a lock-out switch on our E-Stop so those curious children and grandchildren don’t accidentally hit an on button…

Thankfully, my kids are past that and no grandkids so far. My youngest is 12 and he’s learning to use the longmill with me.

This is what I’m planing to use. I’ll wire my power bar to it. I think it’s equivalent to an e-stop. 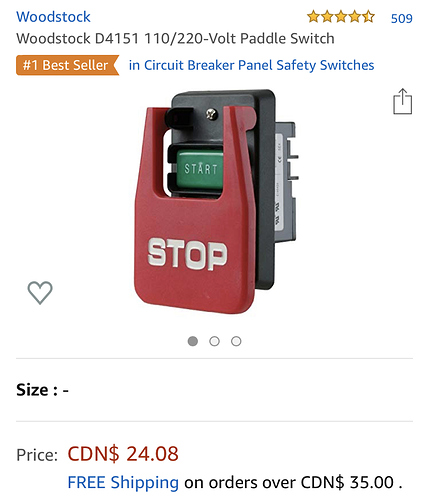 I have been thinking about this as well. I’d also like to mention that I unplug my router when changing the bit, its unlikely it could get turned on but I like my fingers and it would be a shame to have to grow new ones

I was thinking of adding a switched outlet for the router, and an e-stop for the whole machine. I figure I will wired in a plug for those two, and plug it into my power bar. I don’t want to wire my power bar into an estop since I am using a desktop computer and suddenly switching it off is not good for it. I might also need to move the machine after a crash and might not want to wait for it to boot up and all that.

Thanks for bringing this back to the front of my mind!
Mike

I’m probably making it over-complicated, but I’m going to put switches on my bench for the vac, router and main power to the LongMill electronics and Pi. They’re going to switch individual outlets under the table. The e-stop will take out the router and the LongMill power. If my dang 3d printer will hurry up, I’ll have it done soon and post how it turns out.

Hey to each their own. If you want it have at it. Show your final set up let us see how you do it.

I must admit to being rather disappointed to learn that the LongMill does not have provision for external Pause/Play/Stop buttons. Particularly as the Mill One does seem to have these (see image). I hope I am wrong and that somebody will correct me, but I cannot see any sign of suitable connection points on the LongMill. 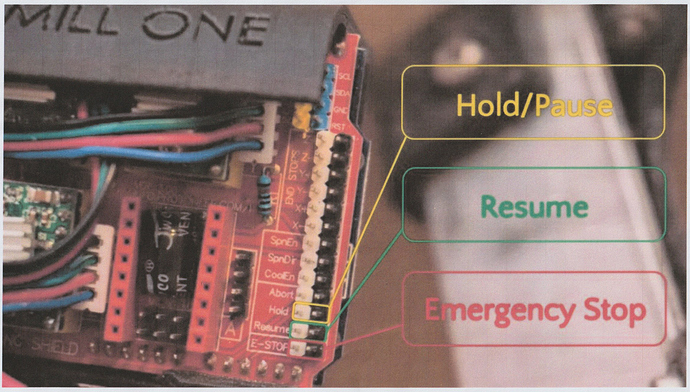 I think most guys take the power cords and plug them into a plugged switch that they can smash. Or hardwired the plugs into the box of the switch and then just ran a plug from that switch to the wall socket. That is the easiest way to do it. Don’t mess around inside the control box. Good way to ruin something.

Yes, that would work for the Emergency Stop, in an unnecessarily crude way IMO. ie: it really does only function as an emergency power off. I was hoping to externalise all three of the surface mounted buttons (Play/Pause/Stop) so that I could keep the LongMill Control board tucked out of the way and free from wood dust, but still have easy access to the control buttons. It seems to me to be a major design oversight on an otherwise awesome machine, and a rather weird step backwards from the functionality of the Mill One.

Andy: I can’t speak for Kevin, but I believe the issue is that it may be difficult to reach the controller in the event of an emergency. In my case, given the short motor cable length, I cannot easily reach my controller from the front of my Mill. I’ve addressed this by having the controller and router plugged into a power bar, and that bar running through a big stop paddle. My PC is not on the power bar, so I am not killing the PC when/if I need to hit the emergency button. Others may not be in the same situation.

It seems that everyone is forgetting that this is an entry level cnc that is and will continue, no doubt, to be a community led development of an idea that Andy & Chris developed (on their own) over time. That it doesn’t do this or that or phft whatever is really anti-productive, it does what it says on the package and does it well without having to take out a 2nd mortgage on the cottage. If it doesn’t do exactly what you want it to do then modify it and get on with it, share your mods and ideas and we all benefit.

@kevinbuckner I think there is an advantage to the power switch linked e-stop, and that is tht you can kill power to everything. For example, if the machine is doing something bad, hitting the e stop will kill the machine, and the ROUTER. the router is the dangerous part, hitting stop on the control box is not going to stop it.

Also, not knowing how the control box buttons are wired up, but if they are triggering a software interupt, then you are relying on the assumption that there are not software bugs or other problems to stop the machine. Though I am sure the software used in the Longmill is good, for stoping the machine, I think a hardware switch is ideal as it cuts out any other factors.