I completed the experiment today and carved a couple of earrings in walnut. All that is required is the addition of a couple of french loop wires. Walnut being much harder than the maple I was using so I adjusted the cutting parameters. The pair of these were carved as one model in Carveco Maker. The whole model was carved with two tools. The roughing toolpath was offset and the finishing toolpath was spiral in a box. The carve from start to finish was around 2hours in total. I used an .STL file for the model.

I had a piece of walnut that was 20mm wide and 15mm deep and after the carve, I had the remaining base of 8mm (7mm model depth) that I cut off with a bandsaw and then very lightly sanded the base by hand with 1000 grit paper. The walnut was darkened by adding beeswax creme.

EDIT: gSender was used to send the GCode produced by Carveco Maker to the machine.

Show for size against an English five pence piece 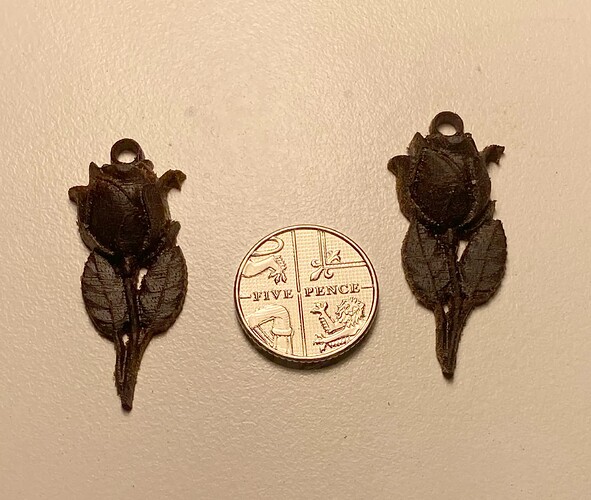 @jepho Very fine indeed, Jeffery. I’m sure that the lady will love them.

Thanks Grant. I was pleased to be able to work so small and get the feeds and speeds right for walnut.