So after a couple posts from members in our community pointing out an issue they were having with their X-axis losing steps during rapid movement / high feed rates, I took some time over the weekend to investigate. Since we had never encountered this issue during our extensive testing, my initial thought was that they had either over-tightened their v-wheels or there was another component which had become misaligned during assembly; and when I recommended this fix to the members having this issue, this did seem to eliminate the problem. One thing that was still curious was the fact that when Andy and I had decided on the LongMills default maximum feed rates, we’d found the maximum that the machine was able to withstand and then halved that amount in order to ensure that the default profile of the machine would remain well within its abilities. This is why I didn’t understand why the motor would be torquing out at a much lower speed, even with the possibility of parts being slightly misaligned during assembly.

Upon further inspection, Andy and I discovered that the maximum feed rate that we’d set for the X-axis (5000mm/min) also happened to be near the resonant frequency of the NEMA 23 stepper motors. This meant that despite the motors being able to move at a faster speed than this, the frequency was disrupting the movement of the motor enough to reduce its instantaneous torque, thus causing is to sometimes stall. We found that this was most likely to happen when moving in the X-axis from a stand-still to full speed. Because of this discovery, I think we will now be changing the firmware of the LongMill so that the maximum feed rate in the X-axis will be 4000mm/min instead. This will put it far enough from its natural frequency to ensure it has enough torque during rapids, as well as this is the speed that the Y-axis is also set to so this wouldn’t have much of an effect on the speed of the machine as a whole. This change should certainly allow the machine to move more reliably in the X-direction so that it doesn’t accidentally lose steps during your projects.

If you’ve already received your LongMill, you can also make this change to the firmware yourself very easily. Once you’ve connected to your machine via UGS or your preferred interface software, go to the console communication tab and type in: $110=4000. This will modify the maximum feed rate of the X-axis to being 4000mm/min. 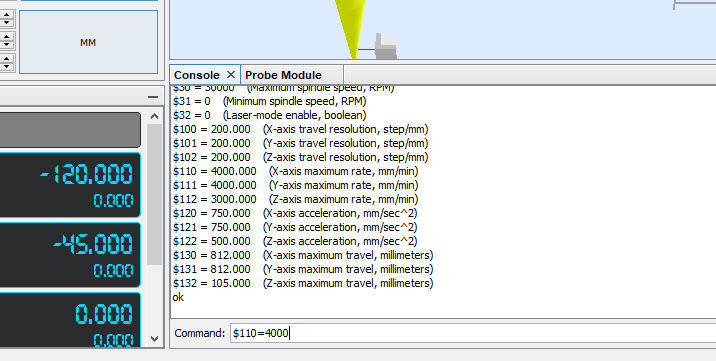 Finally, in case you’re wondering, after this change the maximum default feed rates of all the axes on the LongMill will be as follows:

Wow who knew that could cause a problem. Does that slow the machine down a lot Chris?

Normally when you’ve made your gcode, axis movements will happen in multiple axes during the cutting job. For example, when you’re cutting out a 2D profile like the dust shoe pieces, the router moves down into place and then moves in both the X and Y axis at the same time as its tracing the outline of the piece. In these cases, the speed of the movement of the machine will be limited by the slowest axis. So even if the X was set to 10,000mm/min but the Y-axis was set to 2000mm/min, then the machine would only move at 2000mm/min when its moving in both axes at the same time. All of this is to say that this firmware change won’t have a very drastic effect on the speed of the machine as a whole.

Oh ok. Thanks for the explanation.