Hi Everyone. I’ve owned my Longmill MK2 for about three months now. It was initially very exciting to use, but as the days go on, it just becomes more and more frustrating. Let me explain.

The machine had a terrible grinding noise since it was installed, but that was not a deal-breaker. I simply lower the rapid movement speed and it’s taken care of. Sometimes Gsender would freeze when running the outline command, if the file is bigger than a couple of Mbs. That’s ok too, I just won’t run the outline before I start a job.

But in the last month or so, the router would go haywire and ruin my projects - the larger the file, the longer the runtime, the more likely this would happen. The bit will have a mind of its own and stay at the project base height and won’t come up, practically flattening all the projects. I’ve seen a high frequency of occurrence after the 90-minute mark. The machine still runs horizontally, but the router won’t move up or down.

I’ve tried many things mentioned by the manual and on this forum: grounding the dust hose, resetting the anti-backlash nuts, tightening the M5 screws, I still haven’t seen any changes. The most disheartening thing is, it just happens so randomly that I’m afraid to use this machine. It’s not just about the cost of the materials it ruins, but also the fact I have to watch many work pieces being torn apart by the very router that creates them.

Please help me if you’ve experienced similar issues, and have found a solution. I’m seriously considering selling my Longmill if this problem goes on. Many thanks. Below is a picture of the Longmill carving a deep canyon in the work piece. 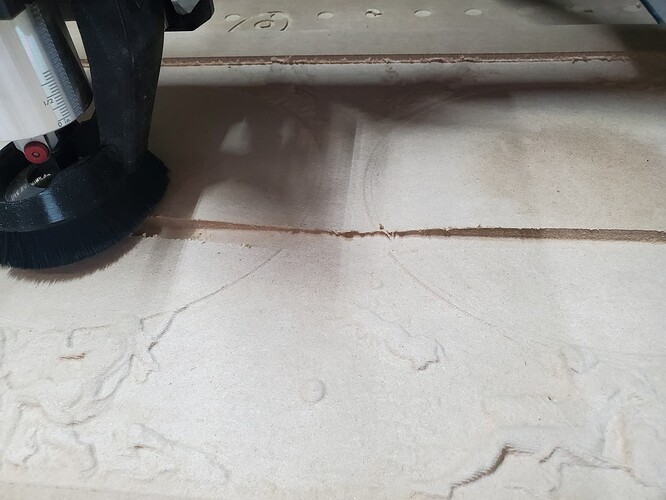 Have you contacted Sienci Labs for support or just posted your issues here?

Blockquote Don’t see your question, looking for tech support, or looking to learn more? Call us at 1-855-220-1231 or email us at hi@sienci.com with your question or a detailed description of your problem and we’ll get back to you as soon as we can!

I too had a very frustrating beginning and the support from Sienci was extremely helpful in getting everything straightened out. We discovered some issues I didn’t even know were issues until we started troubleshooting the problem. One was the belt not being tight enough. I remember being unsure about it during the setup, but I had forgotten about it once it was up and running. After a few checks here and there and some try this and that, I had the unfortunate realization that I was the issue. That was a bummer but exciting along with a little embarrassment.

This was all new with mechanical/software and I was too frustrated, too close to see it when it started.

I’m not suggesting you are the issue. I wanted to share my experience with their support. I wish you luck and I do understand your frustrations.

I have sent them a troubleshooting request. The thing about their support is, they suggested I should call them to resolve things, but I’m at work during their work hours and by 4:30pm they are closed. I don’t think they offer support on weekends.

All my support was done through email and it took a little over a week if I remember correctly. Maybe try calling/emailing them and ask if you can do it that way.

Again I hope it works out for you

Believe me, I have had some of the most frustrating problems with my machine and I also have had it for three months. Haven’t been able to carve anything of size or substance yet. Andy is working with me now, and we may have most of the problems ironed out. I had a lot of mechanical issues along with a defective arduino board. They replaced the parts, no problem. Now it appears to be some software and user problems. My main issue was after running about 3 hours, it would decide to just jumpo off X or Y axxis and carve wherever it wanted to, totally ruining a 3 hour carve.

I had the same problems!!! I really raised holy heck, and someone actually called me, set up a remote connection to my computer, troubleshot the problem and determined the arduino board was defective. They shipped me one, and it only took a week to get it. Of course, being in Ontario, everything I get from them takes a week

I also had bent lead screws from the factory, and the Y axis rails were beat to heck and back, almost as if it were a used machine repackaged and shipped. However, to their credit, and after receiving my photos, they shipped all those items out to me. So far, I guess all I really need is a new controller to have had everything replaced. I BEGGED BEGGED BEGGED for a return and refund, but they told me that no matter how long it took and no matter the cost, they promise to make the machine work properly. I said, why not just send me a new machine? They said they had thought of that but I already received almost everything new

I tell everyone I know who is looking for a CNC to please look at any other machine than a Longmill, and so far three guys have done just that. Not trying to be mean, but I don’t know if I can EVER trust this CNC to make anything that I can sell. And that is the sole reason I bought it, to make a business.

It’s so nice of you to share your testimony. I feel your pain! I’m in Ontario too, and I was on the waitlist for more than a month waiting for this machine, but it was not 100% from day 1. I’ll call them tomorrow and see what they can offer me. It’s quite frustrating when you have to spend close to $3000 and not getting a foolproof product.

I had all the same issues that you had and I don’t even own a Longmill, so the issues are independent of the machine. I would recommend that you get a stactic free hose, not cheap, and attach it to your mill, not just grounding.
I don’t know how to make a link to a prior post, but I think if you search my username you may find a prior post that clears up some if not all of your problems.