Hi, I haven’t received my longmill yet, but was just wondering what people are using for their design software with gsender? I’m new to CNC and am looking for an easy to use free software. Thanks

When I order my longmill I downloaded the trial versions of Vectric vcarve and vcarve pro. I couldn’t really do anything besides following tutorials on youtube but it did help me get a little familiar with the terms. You also have Easel which is very user friendly.

After I played with all of those I ended up getting Carveco and had to learn the vocabulary all over again.

Thanks, I’ve been playing around with carbide create and seems pretty good. But just wonder what others are using.

I forgot all about carbide create and camlab.

I really like carveco maker, once I learned a bit more about what I’m doing but I hate paying a mothly fee for it. I may be switching over to vcarve soon, IDK

I have been using (I am a nubee) Vcarve, and like it. Garrett on u-tube is an excellent instructor. Just my $.02 cents worth. Check out the following video: 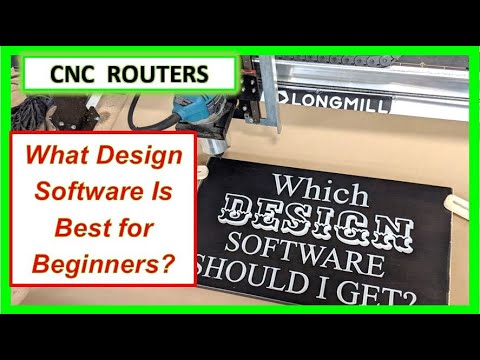 I’ve been using Carbide Create (free) for vcarving and 2D stuff, good option for getting your bearings. Camlab or Kiri:Moto for 3d stuff.

I’ve been playing around with carbide create and vcarve. These 2 seem to be the most recommended.

I am using Fusion 360, but thinking of expanding out for something that can do flat bottomed v-carves.

@drrkdrrk VCarve Desktop and Pro can both do flat bottom v-carves.

I use SOLIDWORKS for design, a little overkill for simple stuff, but for crazy stuff it’s the best. I use Fusion 360 for programming, very intimidating, but well worth it for the ultimate tool path control. Fusion will also do almost everything SOLIDWORKS does for design…almost.

Is it possible to use Autodesk Inventor to design my work ?

@Calchaz4 Welcome to the group, Charlie. There are many experienced users here waiting to answer your questions and to help you have fun with your Mill.

Sienci lists inventor cam, the cam application used with autodesk inventor, as having post processors for grbl inch and grbl mm. Either one of those posts is compatible with the Long Mill controller.

I was in the same boat as you, when I got the LM I didn’t want to pay for a software. I used a combination of Inkscape and Carbide Create and it served me well for about a year.
My neighbor has a smaller CNC and uses Vecric VCarve Desktop, which is a great software but I didn’t want to fork out $350 for it. Also it is limited to 24*24 inch, and some of my carvings are bigger than that.

Just recently I signed up for Carveco Maker (you get a 30 day free trial, $15 per month after that) and I love it.

I’ve had my LM for about 6 months now. When I started out, I tried a bunch of recommended software, including carveco, vcarve, easel, fusion 360 and a bunch more. Found a lot of them had a very steep learning curve.

In the end I settled on Easel, it’s super easy to use, very intuitive and let me really hone in on a lot of the basic skills like feeds and speeds, probing, limits, vcarving and more. Im doing mostly all 2.5D work, and it’s great for that.
For more complicated designs, I would do the design in Inkscape, export the SVG and import it into easel and tweak the toolpaths.

I’m now staring to get into 3d shaped and realizing I’ll need completely different tools, which I have yet to find the workflow for.

Tl;Dr: Easel is amazing and very intuitive to get started. Use that first and then expand into things with a steeper learning curve

You received good software advise for getting decent results with expending the least $$. I originally bought a NextWave 12x13 for my shop to make just plaques and other small items. Granted, NextWave makes very good turn-key machines. But I switched to a LongMill because I hated being tied to Vectric software for machine control because of the Shark controller firmware. If you want to use a larger machine with VCarve you are forced to upgrade form Desktop to Vcarve Pro for design which permits you to set up for a larger machine. I understand that Sienci is going to come out with “commercial” machines. Let’s hope when they are all driving $100K plus cars they keep supporting us with parts for the LongMills. LOL