New project as a game for some children from 6 to 12 years of age. American walnut used to create a model in Carveco Maker that was 144 x 144mm square and 23mm in depth. Pattern was purchased from Etsy for £1.56 ($1.80). This image was supplied to me in many different file formats including; .eps, .svg, .pdf, .png and .dxf. 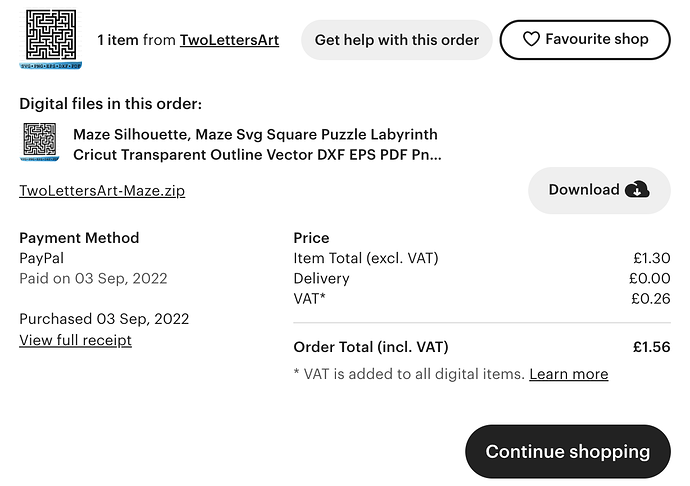 The toolpath was a single toolpath to carve on the outside of the file. A 3.175mm (1/8") cutter was used. It was a straight sided two flute uncoated carbide cutter, with a length of 28mm. The cutting speeds were 500mm per minute for the feed and 250mm per minuted for the plunge. Router speed was set at 10,000 RPM and the stepdown for the 5mm x 5mm channel was 0.5mm.

The completed model was sanded with a range of grits from 80 to 3000 and the final grit of 3000 was used to break every single edge so that the sharpness would nt hurt young children. Finally, the completed model was subject to a single coat of a non-toxic cutting board preparation. This was a creme of walnut oil and beeswax. The channels are awaiting some 304 grade stainless steel ball bearings. Looking at the corners, it is likely that 3mm will be the ideal size. I am awaiting a range from 1mm to 11mm in .5mm steps for each size. 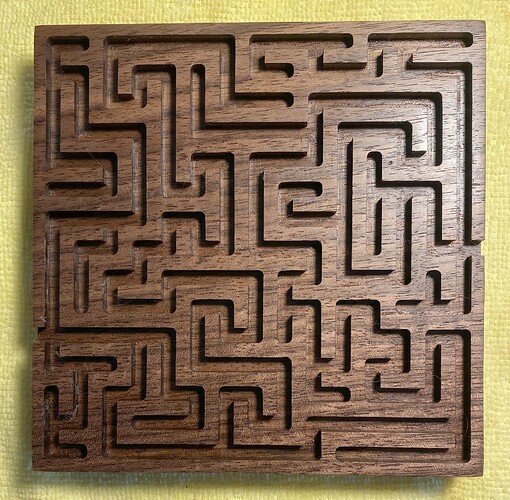 @jepho very nice piece sir! I like the way your machine fastens the workpiece to the table. Have you thought about plexiglass for the top of it? Keep posting, I, for one, enjoy seeing your work!
Jake

It was an expensive choice to get a sea of holes fixture tooling plate (840 holes x M6) in T6 6061 aluminium, which was 1/2" thick. It made the machine so much more rigid and I could use the modular vices then. You can see that they only hold onto 5mm of stock depth balanced on a 1mm ledge. They can be set to any length (distance apart) within the work envelope. The real lesson for me was that the more rigidly that you can hold onto the workpiece, the more accurately you can work.

The maze workpiece was very slightly misplaced by about 1/10th of a millimetre so there was a score line on one edge which was very easily removed with a little light sanding. Wood generally does not need fine tolerances and almost anything will do if you are within 1/2 mm. When milling metal, I work to ± 0.001" which is ok but not really accurate enough for some formal engineered applications. Anyhow, I would never go back to a soft wasteboard/baseboard combination.

Have you thought about plexiglass for the top of it?

Yes, I did but I chickened out. I did not want to ruin a nice piece of wood by mixing plastic with it. I also thought that it would need a fairly special glue that would dry clear. I suspect that tiny screws would not really do the job without splitting the wood. I do have some really thin and tiny magnets and these may have done the job but I had not milled a space to locate them. They are just 1 x 2 x 0.5mm and being neodymium, I feel reasonably confident that four of them would have been strong enough to do the job.

Keep posting, I, for one, enjoy seeing your work!

Whoopee! A fan club of one! 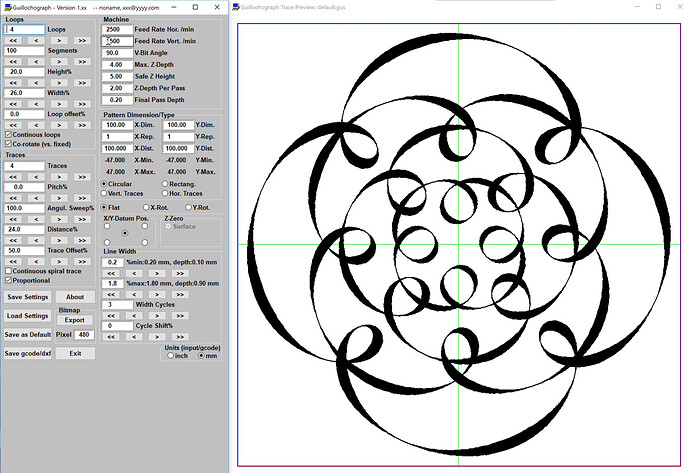 Fan club of two and stop paying for stuff you can mess up yourself
Keep making fun stuff!

And please pay respects to Tailmaker

Fan club of two and stop paying for stuff you can mess up yourself
Keep making fun stuff!

Thanks Rick… I had heard of Tailmaker in a previous existence. Vectric files and Windows .exe files. This is a Mac house so no dice for the .exe files and a Carveco Maker user so no Vectric compatible files either. Thank you for trying though.

I think there are enough source files abut. I like Etsy for the eclectic mix and Cults 3D is a great place to shop to. Many files for free but anything that costs is usually stunning quality. I have been considering a 3D scanner buy the good ones are still a heck of a price.

@jepho understood
If you need something from an exe, we can crank one out
Yep, 3d scanners are spendy

If you need something from an exe, we can crank one out

Oh, thanks you. That is kind. I don’t know the Windows PC side of things very well at all. I would not want to give up on Carveco Maker though, so that keeps me honest and I use Windows for that via BootCamp on the Mac. More that I use Carveco and ignore everything else.

I forgot about the maze. I wanted to do one of thees. Very nice and I also like seeing what others are doing with their machines. Most of it is way past my skill.

Most of it is way past my skill.

I doubt that… if you can cut a pocket then you’re golden. Pocketing a narrow channel is considered by some folk to be next to a criminal offence. It is not if you do not attempt to remove too much material in one go. I made a 5mm x 5mm slot for the maze channel. I used a 3.175mm (1/8") cutter and a stepover that ensured the cutter would cut the channel in two halves.

The crime(for real machinists) is the 100% tool engagement and it can be helped by taking a smaller bite and not using the cutter diameter as your final channel width. The cutter can get too hot and the sharpness dulled by forcing the cutter through hard stock at high feed speeds with 100% engagement. It could help you to find some articles on cutter engagement to make the issues clearer for you.