Return to zero no z axis

I’m sure there is a simple answer here and its likely been covered before. For some reason in gsender my return to zero only offers XY0 and not XYZ0. Any idea?

@Doug4 - Was originally XYZ0 but was changed in a later release. Can’t remember why but was done on purpose. So now it’s a 2 step process. Try searching through the forum and you may run across the answer. You could set up your own macro to do all three axes.

It’s been XY Zero for a bit over a year now and was a deliberate change.

Separating the movements into two actions helps us avoid that - the user can move to XY0 at a safe height and then to Z0.

As @Heyward43 mentioned, if it’s something you really want you can set up and keybind your own macro to achieve the movement, but it’s not something we plan on changing for the main UI functionality.

Thanks for the explanation gents. Mentioned was the second step to get to Z0. Is there a way to do this or i this a manual jog thing? 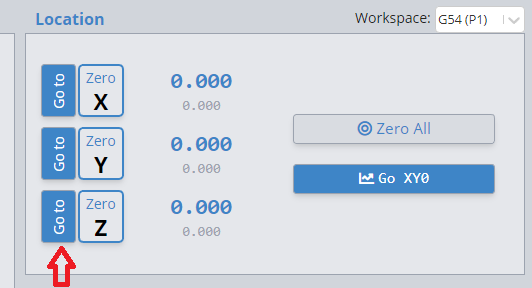 I can’t give a reason for why it was changed, but I can tell you why I like the change. Z0 is typically on the surface of your stock. A single move to X0Y0Z0 could potentially have the endmill moving at an unsafe height (clamps). There are also times where one would want to set Z0 at the bottom of the stock or at some depth into the stock. This would obviously be an issue, possibly a safety issue, if someone hit that button by mistake.

EDIT: I scrolled and saw this has all been answered already. Sorry.

As the original issue has been addressed, I’m closing this topic. If anyone else has a similar concern, feel free to start a new topic, which will ensure that it is addressed promptly.