Slippy X- how about 2 antibacklash nuts on it?

Slipping X-gantry issues-
I have been struggling on & off with a stubborn issue of X direction slippage I have had with my Longmill 30x30 V3.

As I reviewed the assembly manual to deconstruct the gantry in order to replace the anti backlash nut that rides the lead screw, I realized that there exists a second location for a antibacklash nut, (and I was left with an extra…)

The photo is from the assembly manual, and I have circled the area in question. The manual only stipulates one on the X gantry but I wonder if 2 might add some more control, perhaps better accuracy. The existing antibacklash nut appears to be ok from what I can see.

Has anyone tried this? Is it advisable?
I would greatly appreciate your opinion.
Thanks 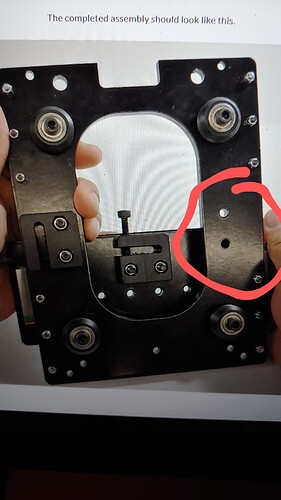 I haven’t tried this and don’t know if it’s advisable but I would be surprised if it works. I say that because the chances are that when the lead screw hits the second anti-backlash nut it won’t be at the correct rotation to enter. Unless it just happens to work out I suspect the two nuts would would lead to the lead screw not rotating freely.

Just my two cents, if you try it let us know how it works.

Thanks for that. You saved me some trouble!
If i have time I may experiment, but you are most likely right.

It isn’t advisable to have two blocks on one axis. Assuming that the threads are still there, the screw and block can’t slip. It is possible to wear the threads out completely, but in my personal experience, you’d need at least 3000 but probably closer to 5000 hours of use to get to that point.

I suspect the slipping is coming from the coupler more likely and you should check to make sure that things aren’t slipping from that area or replace the coupler. Having two blocks but a slipping coupler will likely exacerbate the issue.

Thanks Andy
I will take your advice on it & try tightening the coupler instead then.

What led me to think it could be the lead nut was a few accidental churns at one side or another when I first started using the longmill, which I suspected had damaged the threads. Since I observed no discernable thread stripping once I removed it, I planned to replace it with the spare anyway.