For the most part I use Carbide Create and UGS and have just used mostly 1/4", 1/8", and V bits with no problems. However, I recently tried to take a leap out of my comfort zone and add a surfacing bit (22mm) to CC! It worked ok to begin with but then the router stopped moving and the UGS screen controls greyed out. I thought it was something to do with me adding the tool to CC so I switched to the Sienci recommended Intuwiz ‘surfacing software’ , ran that g-code and the same thing happened. I tried it a couple of times and it seems random in when it stops. I thought there was possibly something else going on and ran another v carve job-no problems. After it stops using the surfacing bit I can restart if I shut off the controller and pull the USB cord out of the laptop and reinstall. It appears like it drops the COM port for some reason but I’m not sure why-any ideas?

I’ve seen some instances of people losing connection to their machine when cutting large amounts of MDF due to the static build-up causing electronic issues. Are you able to run the code to completion while the router is running but just running it in the air so it’s not doing any cutting?

@Botanywood What are you doing for dust collection. The static caused can upset things.

Ok- so I ran the g-code from Intuwiz but this time just an air cut…ran flawless. I’m leveling end grain on beech wood cookies and not MDF, so not sure if that is relevant or not. My dust system is in another room but not specifically grounded. The shop vac is sitting on top of a metal cabinet and piped using small plastic pipe to the Longmill. Seems odd that it took the larger bit to cause this problem but I do wonder if I was on the edge before to having problems even with the smaller bits because there were times in the past that after a longer carve I would get a slight static charge when I shut the router off-maybe should have been a clue! Since this seems to be narrowing in on the problem do you suggest I ground the Longmill or the dust system (or both) and is there a preferred way to do this? Thanks for your help.

@Botanywood You should look to grounding the dust collection. Assuming that your flex hose does not have a metal wire in it, you can simply wind a non-insulated wire around it. Attach the wire to the “router end” of the hose with a screw through the hose. Wind the wire around the hose up to the shop vac. Then attach that end of the wire to the ground How you do that really depends on your set up. In my case, I just attached the wire to a male plug. I cut the two power lugs off the plug so that all that remained was the ground lug. I just plug that into the power bar that all my Mill electrical is plugged into.

Your other option is to run the bare wire inside the vacuum hose.

Thanks for the reply this is what it looks like… 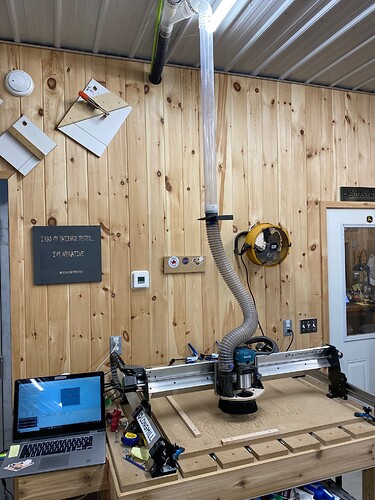 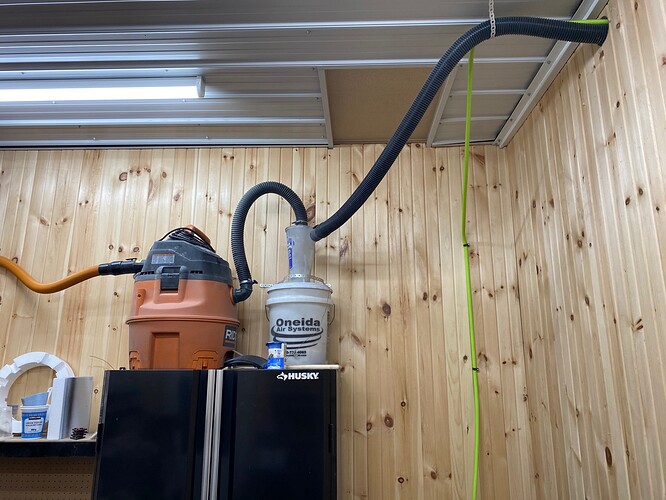 @Botanywood That flex hose looks the same as the one that I am using. It has a metal wire running inside it. If I were you, I would bare the end of the wire at your blast gate. Attach a bare wire to it and wind that bare wire around your rigid pipe and the flex black flex hose until you can attach the bare wire to ground.

All that said, I know that may here are not having any issue with static electricity, so take what I saying in that context. I know that I was having many freezes before grounding and none since.

Thanks for the info on how to run the wire to ground. One thing though that it sounded like we had in common with this issue is the 2.5 flex ducting with the metal wire running inside it. So I wondered if I just replaced that with another flexible hose with no wire inside and see if that changes anything before I run a wire. I just ran the g-code 2X and it did not stop either time. I have a few more to go though so we shall see if it continues, however at the moment it looks like the hose with the wire was causing enough static to shut things down. I still see little bits of sawdust clinging to the outside of the dust port so I think there is still some static going on so it it might still be worth it to still run the wire as insurance but for now… Problem solved…I think-Thanks!

@Botanywood The wire in the hose is a good thing. It will help with the static. If you were to replace it with an ordinary vac hose, for example, you would need to add a wire to achieve the same result. It’s the combination of the air resistance and the chips/dust brushing against the sides of the hose that create the static. (You likely know that.) We need the wire to conduct it away, as the hose material is non-conductive.

As you’ve seen, one the problems in trying to fix these issues is that they are intermittent. Just when you think that they’ve magically gone away, they come back. Then you do something and they disappear, so you think you solved it; only to have it come back in the middle of a a subsequent job. As you say, if you have dust clinging to the outside of the hose or blast gate, you still have a static issue. Whether it is enough to trip the Mill, only time will tell.

I agree with everything you said-I’ll probably still add the wire. Really not worth the chance of being say 2.5 hours into a 3 hour carve and suddenly things stop-definitely makes things messy. Thanks again to both you and Chris for your help with this.

@ Botanywood, I did a carve yesterday after adding the wire and was interesting to see the section of hose with the wire had no build up, after a coupler to another hose I could see dust collecting on the portion without the wire.

@Bill @Botanywood I just made a change to my system and the results look promising I replaced the wire that I had wrapped around the outside of my rigid PVC pipe with a wire running inside of it. I am running that wire inside the flex, too. I realize that there is a possibility of chips clinging to that wire and over time clogging the pipe, but I’ll burn that bridge when I come it it. So, that wire now runs from the dust shoe to the ground lug.

In addition to that wire, and in the spirit of belt and suspenders, I stuck metal foil duct tape running from the wire coil of the flex hose, along the rigid PVC, to where the interior wire exits the rigid PVC. I’m sure that this is overkill, but I had the tape.

I ran a job surfacing my secondary spoil board and then surfacing my vacuum table. Both of these are MDF. Using the surfacing bit from Sienci, these jobs create a lot of nasty fine dust. In the past, I saw some dust clinging to the outside of the PVC. After these two jobs yesterday, the pipe was still clean. Now, I didn’t conduct my experiment with only the inside wire in place, so I can’t know if the tape helped at all. But, it sure didn’t hurt.

I did run the wire inside also, I already trip over everything so reducing the hazard!

@Botanywood that is a fine looking shop my friend, better than my den!

I thought I would follow up with what seems to be the final fix on this for me. Much the same as what @Bill and @gwilki mentioned. I ran the ground wire inside the first flexible length and then ran outside wrapped around the rest of the run to a ground. Been running a few different jobs since this was installed and no issues with static and more important- no random stopping. Thanks again everyone for the help…and thanks @Bill …Sienci friends are always welcome in my shop! Here are a couple pictures of what it looks like now… 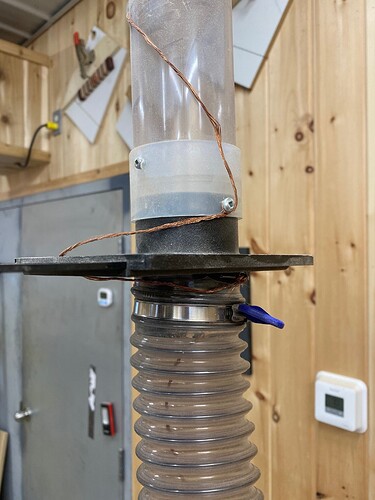 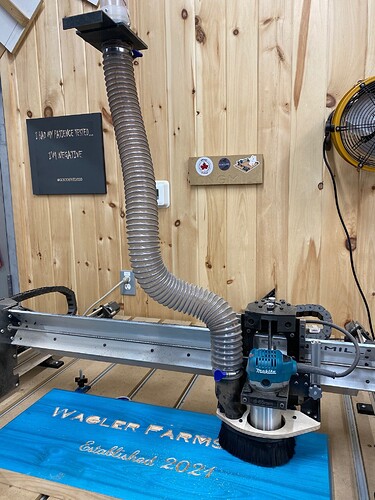 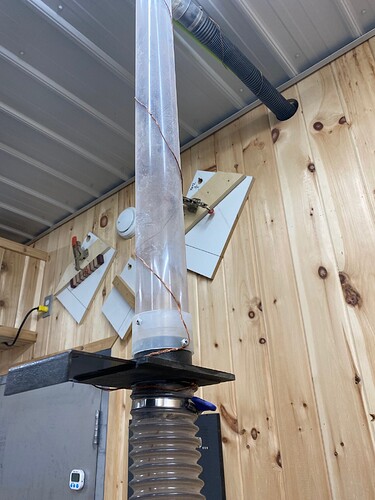