I just read on the UGS Google group that Will Winder has released a nightly build that includes a run from here feature.

Using this, if UGS freezes or the Mill stops running a Gcode file for any other reason, we will be able to edit the Gcode file in UGS and have it run a new file from where the old file left off. Before this new feature, we could edit Gcode in UGS, but, if I understand this feature correctly, now UGS will “know” which lines before the line where the file froze need to be retained and which can be deleted.

I’ve not tested this yet, but assuming this works as advertised, it could save some lost projects.

Thanks Grant. This will come in handy.

Grant, I gave this a quick try, and it does work. You just pick Machine and Start From in the menu and pick a line in the gcode. I only used a program already loaded and didn’t do a very thorough test, so maybe there are some safeguards built in, but one thing to watch out for is that it doesn’t know where zero is and starts where the cutter is, so if you tried to pick up after an oops and moved the router since you stopped, you may not have the room you need. If you restart UGS and try to pick up where you left off, it also won’t know speeds & feeds. I can see this definitely being useful. Thanks for the tip.

@BillKorn That’s good to know, Bill. I had read that you needed to set a new Z0. I have not had time to try it yet. I did download the nightly build. I hope to test it out on some rigid foam tomorrow.

@gwilki Grant, where did you get the April 2020 version of UGS. I just went out to the github site and it’s only showing the August 2019 version for downloading. Both classic and platform, nightly and stable. Where did it go? I searched the internet for it and it’s not coming up anywhere. TIA.

The nightly build platform is August 2020. That’s the latest and the one that I am running now.

Thanks Grant. I could have sworn there was an April 2020 version out. Oh well, my mistake. Thank you sir.

@Heyward43 I believe you’re right. There was. I can’t find it either.

@Heyward43 Well, H, I found the April 2020 version. It was on my PC - duh! I was sure that I had run it. It was solid. I only went with the newest because it was available. If you have any issues with the August 2020, let me know and I can attach the April one to an email.

@gwilki Guess what? I found it on both my laptop and desktop. It’s labeled "ugs-platform-app-2.0-SNAPSHOT. I guess what threw me off was it still showing 2.0. But it is the April 2020 release. Thanks for your help searching for it. I’m not sure where I originally found it but it’s not on the github download page. I think I will install it on my shop pc just in case I need it. I have gotten real comfortable with CNCjs so probably won’t be changing back anytime soon.

OH! I just ran across some laser stuff that you might be interested in. I was researching and watching youtube videos for lasergrbl and ran across extensions and post processors. First I downloaded and was going to try the InkScape extension for generating laser gcode. It was written by the folks at JTech lasers. I had trouble getting it to access the library I had set up on my desktop. Haven’t figured that one out yet. But I noticed in the info column that JTech has written a laser post processor for Aspire, Vcarve Pro and Cut2D. I took a quick look at it but I haven’t downloaded it yet. You set your laser up just like one of your tools. I think you set it up as an End Mill. Of course it has special meanings for the parameters. Looks interesting. Search for JTech Laser Post Processor and the Vectric one should pop up. See what you think.

I’ve been using LightBurn for my projects. It works well and is pretty intuitive and is only $40 USD.

H. That’s a great find! It’s interesting that it’s been around for years. Vectric has come out with an add-on module for laser use. The problem for me is that it will only work on the most recent version of their software and the version that I have access to is too old. Your find will run on the version that I have. Thanks much.

Paul: I’ve been playing with LightBurn, too. Since my laser is bad, I’ve not been all that successful, but it is very powerful. The beauty of this PP for Vectric products, for anyone who already has one of their products, is that you can start a router job and then add in laser features while the piece is still held down. It will be just a matter of turning on laser mode in the controller, then running the gcode.

You can do the same thing using a mix of Vcarve and LightBurn. For both I save Gcode files and then run them using UGS. Of course, using Vcarve for everything would solve some alignment issues.

@Heyward43, @gwilki, I checked out the Jtech post processor (newest No Z version - GRBL mm) and it actually works pretty well. There have some things in Vcarve that you have to set differently between routing and lasering so that complicates things a bit. I ended up saving a separate .crv file of the project for the Laser portion and the CRC portion to keep things straight. They are basically the same except for those settings that are different. You probably don’t have to, but it helps me keep things straight.
Here’s my first effort, a very small cutting board. It’s only about 6 1/2" long and still needs some finish. I used the laser first and then cut it out. The whole thing was done with Vectric Desktop. 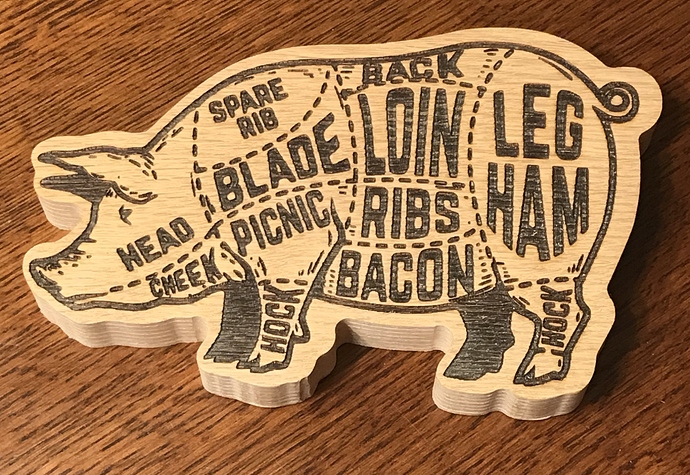 Paullarson - that is really cool. Somehow I just knew you would check it out before anyone else. I really like that. If I can just get my laser hooked up maybe I’ll get to try something like that. Thanks for posting that.

Heyward, several times recently while using cncjs I’ve had the router suddenly take off for random moves in the wrong directions. It’s damaged a fixture I use all the time and ruined a good piece of stainless steel. I thought it was due to the 6-axis GRBL I was using with the 4th axis, but it’s also happened with the standard 3-axis. Have you had any similar schizo move?
Bill

Sorry Bill but I have had no issues so far with cncjs. I don’t have a 4th axis setup so can’t test it and the grbl setup is still the original one loaded by Sienci. Please keep us posted whatever you find out.

I’m a little puzzled. I made 11 identical parts about 4"x3"x1-1/2" high with 1.25 " deep pockets using CNCjs. On the 12th, and last, part I got random moves and trashed the blank. Re-loaded a blank, and got similar moves, this time with severe Z drops through the bottom of the stock into the fixture. I compared the file with the original, and even re-posted the job from F360 and compared them, and they were identical. I decided CNCjs must have had a stroke, so I re-booted and re-ran with similar results.
I switched to UGS to get the last part made, but I got more random moves, so it’s clear it’s not the software. I checked all the cables, all the wire terminations, the plugs into the motors, etc. Tried again and it drove the bit down through the bottom of the stock and took off in +Y. I can’t believe the controller is at fault, but I’m running out of ideas.

@BillKorn, just a thought. Two thoughts, actually. 1) can you use the jog controls without problems? You’d probably have to do a lot of jogging for a significant test. 2) Try removing the router bit, leaving the router off (and any vacuum, dust collection) to remove electrical noise sources, and then run your Gcode again to see what happens.