Z axis cable is too short

So the Z axis stepper cable is too short for me to be able to locate the controller anywhere but a few inches away from the left rail … ok, so “make a new cable” - no problem… though I was wondering…

Lastly … Where to get ??? I tried amazon and a couple electronic supplies, the options in cable for some reason are really limited! anyone have a good (Canadian) source?

I used some of the excess wires (~6") from one of the y-steppers and spliced that in line for the z-stepper. Works fine! 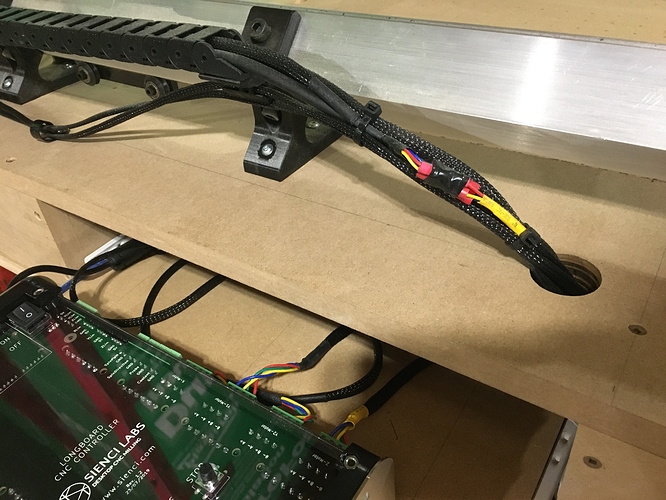 Great idea @Schlumph! I’d recommend using the butt connectors as well since it allows for easy wire extension without the need for soldering; it’s much faster to set up but they still make a reliable electrical connection. It looks like that’s what you did

@KimballArms the braid around the wires is called braided cable sleeving. I wouldn’t know off the top of my head whether CAT-5 cable would be able to carry the required current to operate the stepper motors, but it could be calculated. The original wiring we used for the LongMill prototype is “18/4 stranded security wire” which is pretty common to come across and has the same gauge as the current wiring harness and is also shielded.

One warning about using single strand wire. The copper wire can work harden inside and it will snap while its bending even though its inside the drag chain. We actually had that happen at the Toronto Woodworking show last year. It ruined the project we were cutting.

To be safe use braided wire ok?

I found some 16 gage stranded wire at princess auto - they also had the sleeving. $3/25 ft for the wire and $12/16ft of the sleeving. A little heavier but should be fine.

I did a little more digging on the cat 5 stuff & no, it generally isn’t rated to carry the current needed & yes, the single core will break every time. So a pretty definitive “you can’t use cat-5 cable”

Very good Thanks for the info!

Chris: wanted to ask you what cabling you used, so that I would know what to buy for my scratch build.
I see here, that you didn’t use any CY or towline (drag chain) rated cable.
I take it then that you used RVVP rated cable for 50000 cycles? No need to go the extra cost to get >1M cycles?
Hansi