Aha, I see it now. Thanks for the clarification.
And yes, straight shaft up to the collet, would highly simplify things… I’m with you on that.
Keep it up

Grant, I simplified and shortened the frame, added a threaded hole in the top, and edited the thickness for your 1/2" Corian. Fusion did a miserable job creating the dxf but I attached it anyway. If V-Carve imports STLs, IGES, OBJ, or STEP files I can send you one that is much better.

When you are establishing the cut depths for each section note that the blade has to be dead center side to side under the pivot point or it will not track correctly. The frame positions the cutting edge of the blade behind the pivot so it follows the pivot. The original frame is 0.375" thick so I added 0.0625" on both top and bottom.

Let me know. Have fun. 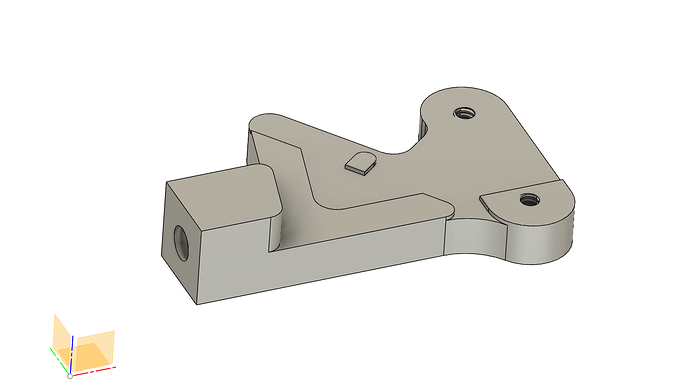 @BillKorn Thanks much for this, Bill. I did one this morning in corian, but I did not take into account adding to both the top and bottom. I just used 1/2" corian, but left all the cutting depths “stock”. So, I’m betting that mine with not work. It’s too bad. It really looks good.

I can import both stl and obj files, so if you wouldn’t mind, post them or send them in a PM if you are concerned about copyright.

. That being the case, Bill and I are going to try one without the bearings and the bearing cup assemblies. It will just be the blade holder and a shaft glued into it. If it works, it will be of a much simpler and lighter design.

Wowza, how did I miss this thread taking off. Still reading through it, but this would be a great discovery if successful. Great work Bill! (Grant, I’m sure you did something to…

So just to clarify, and for the benefit of the slow folks like me that come after and read this thread, it sounds like you believe you may have a simplified drag knife design that doesn’t require bearings and can be milled fairly quickly on the Longmill? Is there much drilling or tapping required with this simplified design or can we basically cut it and go?

I finally got a few small pieces of 1/8" aluminum plate to try milling metal and an 8"x8" 1/2" (I think that’s what I ordered) block should be on the way in the next week (amazing what Amazon.ca carries). It sounds like perhaps I could cut one in that? You guys amaze me…

@jwoody18 Jeff: I just cut a new one this afternoon in 1/2" corian. I did one yesterday, but somehow broke it while threading for the 1/4" bolt/shaft. Stupid! If this works, it will simply be a scaffold for the knife. There will be no bearings. We are trying this because Bill found that, in testing his bearing model, the knife rotated on the router rather than on the bearings. So, I suggested that we just get rid of the bearings. Keep in mind that I have absolutely no idea what I am talking about, but I have corian scraps so I have nothing lose but time.

In reply to your direct question, you need to tap two holes 10-24 for the screws that hold the blade clamp. If you don’t have a tap, you can simply drill the body of the knife to the same size as the clamp and use nuts and bolts. For the shaft that connects the knife to the router, I am using a 1/4" bolt with the head cut off. I chose to drill and tap the body of the knife with a 1/4 x 20 tap and then coat the threads of a 1/4 x 20 bolt with epoxy and screw it in. If you don’t have a 1/4 x 20 tap, you could just drill a 1/4" hole and glue the bolt in. Then, just cut off the head of the bolt so that the shaft fits into the 1/4" collet of your router.

Bill has been my mentor on this. The plans that we bought were for 3/8" material. Since I am using 1/2" material, the cutting depths need to change. Bill told me that. It would have been better if he had told me BEFORE I cut the first one, but you get the advice you pay for.

I hasten to add that I have not made one that works yet. Bill has. I hope, tomorrow to test the one that I cut today. There are a couple of critical dimensions. The first is that the cutting edge of the knife must be offset from centre. This is built into the plans. The second, is the blade must be precisely on centre front to back. That’s where I made my mistake, not compensating for the thicker material. (In hindsight, I may have been smarter if I had sanded/planed the corian to 3/8". )
All that said, I hope to know tomorrow is this bearing-less idea works.

Jeff, the original was not a hard project, and machining all the aluminum was a good exercise. But as Grant said, it turns out that the chuck in the router spins a lot easier than the bearings in the drag knife, so after a couple back-and-forths Grant tried the simplified design. It has a couple things in its favor - it requires less machining, fewer parts, no bearings, and puts the router and the blade closer together, which reduces the moment arm and should make the whole thing a little stiffer and therefore a little sturdier. The router is designed to handle substantial side loads so no issue there.

The frame, now the only piece besides the blade clamp, can be make from any reasonably tough material - acrylic, aluminum, maybe HDPE, and as Grant can attest, Corian. I don’t think MDF or a soft wood would work long term, but a hard wood might.

If Grant agrees, I think we may have changed the design significantly enough to make the drawings and pics available.

So am I correct in understanding that the CAM software uses the pivot point at the tip of the knife, combined with downward pressure and a sweeping arc on the toolpath in order to cause the blade to rotate to the new desired position? So to take an outside 90 degree cut it might stop with the point on the corner and then sweep through arc until the blade would be expected to be at 90 to the original line?

I’m quite looking forward to trying this out, if you decide you’re able to share, when my 8x8 6061 block arrives, hopefully late this week.

I guess I should order a pack of knife blades as well? Any suggestions there?

Jeff, you’re almost exactly right. Some software, including the add-in for Fusion, stops the cut at the corner, raises the blade, does the pivot, and lowers the blade. Here’s the video for the add-in - https://www.pbmilltec.de/Produkte/DragKnife/ Skip to about 10:00 to see the toolpath.
It’s kind of a waste of time with thin stock, but radically improves the corner appearance in thicker stuff like foam. One thing that would be easy to miss is the need to select where the knife starts, and what direction it’s going to go, and then to align the knife in that direction. And start all of the succeeding cuts in the same direction so the knife ends one cut facing the direction it’s going to start the next one. Fun to watch.

I don’t think everybody needs a drag knife, but it does open up the ability to do a whole range of materials you wouldn’t have thought of doing on a CNC mill. And it’s very quiet!

@jwoody18 An update, Jeff, the bearing-less version did not work for me. I tried a couple of things last evening and the common problem was that the knife did not rotate as required. I guess that it’s safe to say that there is a reason that every design of a drag knife that I have seen included bearings.

That said, Bill may have better results.

Jeff, Grant and I almost have a simpler modified bearingless version to try. Preliminary tests on previous versions weren’t too promising, but fingers crossed this one will work better.

I like this! Coming up with something simpler and better… Just keep at it!

@Hansi @BillKorn Hansi: I cut Bill’s design today in corian. There is a little epoxying involved and I’ve done that. Tomorrow, it will be set and I’ll take it out for a test drive. I hope to report success tomorrow.

The aluminum version milled very well. Getting the shaft positioned in the slot and holding it there was more of a challenge than I thought it would be, but otherwise I think it has potential. The epoxy is curing so I should get it cutting tomorrow. It sounds like you’ll be there before me, so good luck.

Hey guys, what is the latest on the bearing less versions?

I did mine in corian, Bill in aluminum. The final design worked well. I cut a couple of projects in foam core that I had lying around. I really had no immediate use for the knife. I just got into it to see if I/we could get one that did not include the bearings to work. In another thread, Bill put a link to a site of his that has the files from both fusion360 and mine from VCarvePro.

A while back I constructed a drag knife for cutting thin materials like poster board and foam based on a design for 1/2" routers by Brian Oltrogge. http://www.grunblau.com/DragKnife.html. I’ve used this knife quite a bit for card stock and it works great. Well worth $5 - I recommend it. [Drag%20Knife%20Side%201] [Drag%20Knife%20Side%202] As I watched the knife cutting I noticed that most of the time the entire assembly, not just the blade holder, turns in the router. Apparently the shafts on th…

Grant, you’re so helpful. Thank you!

I got a nice piece of 8"x8" aluminum that I’m looking forward to trying my hand with. Did you end up figuring out a way to do it without requiring the bearing?

Edit: I see in Bill’s thread he answers that question. Sorry for the duplicate.

How’s testing going with this guy’s?

@Ukracer Andy: Bill and I both had successful cuts with the final design. You can read the previous posts in this thread. Bill opened a new thread here:

A while back I constructed a drag knife for cutting thin materials like poster board and foam based on a design for 1/2" routers by Brian Oltrogge. http://www.grunblau.com/DragKnife.html. I’ve used this knife quite a bit for card stock and it works great. Well worth $5 - I recommend it. [Drag%20Knife%20Side%201] [Drag%20Knife%20Side%202] As I watched the knife cutting I noticed that most of the time the entire assembly, not just the blade holder, turns in the router. Apparently the shafts on th…

in which we gave more details.

Bill kindly shared the design files but right around that time I had a power switch failure and was waiting on a new Longboard. I used the time to figure out my end stop sensors. The new Longboard arrived Friday, I have the sensors almost finished (just tidying up cabling/mounts) and then I hope to try my hand with aluminum and cut the designs Bill shared this week. I’ll update here once I have some results. Given the skill Bill and Grant have and all the details they have shared from their journey, I’m quite optimistic I should be able to get similar results.