Another bi-week another release. This time it’s be a tri-week since the previous release since I gave the team a week to pursue their own concepts and ideas before jumping back into the dev sprint. Let’s take a look at the new changes: @all

Things we’ve got our sights set on for the next release:

Topics I’ve noticed feedback on that we’ll be looking to address soon:

This was another super productive past two weeks for the gSender development team. In addition to all this, we’ve also got a new location to store all the documentation if you’re looking to learn more about gSender and how you can use it (guidance on new features will be rolling out over the next two weeks):
https://resources.sienci.com/view/gsender/

If you’ve encountered any bugs or have feedback on this new release, let’s discuss!

“Start from a specific gcode line to save projects gone wrong”

How does that work? I don’t see any way to define your own keyboard shortcuts. That’s the feature I’m most missing,since I use Touch Control to send keyboard strings to GSender from my iPad mini. Without keyboard shortcuts macros are not useful yet.

If you go to Settings → Keyboard Shortcuts and scroll to the bottom of the list, you’ll see any macros you’ve currently created in that list and you’ll be able to assign a shortcut to them 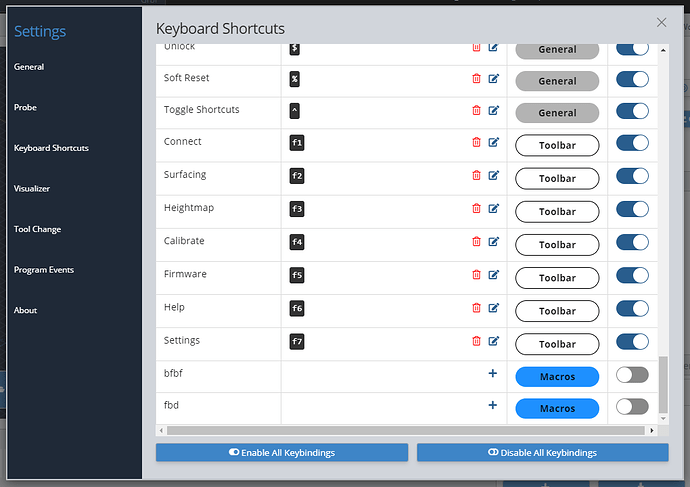 Unfortunately this doesn’t seem to be true.I’ve attached a shot of the shortcut dialog and the macro dialog - the ‘X+10’ macro isn’t present… I even pressed the ‘enable all’ button in case that was needed to update the macro listing. 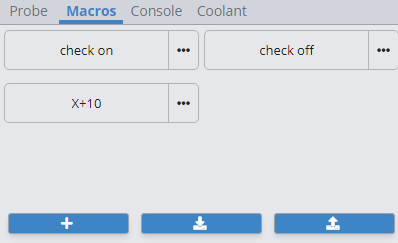 Chris, I don’t know if it was the heat (35-40’C) in the shop or g-sender but when I tried Ver0.6.7 on my RPI4B the time lag between g-sender & what the longmill was doing was well over a minute in duration, also noted that it was running the longmill at 2/3 feed speed. It then locked up with the longmill back at zero with job done but screen showing only a 1/3 completed. I the reverted back to V0.6.4 & it ran first 2 files fine but when I went to run third file it decided to offset 2 of the 4 tapered holes I was doing. On the fourth file which was to create 4 hollows around the tapers it also decided to a) lag & b) cut one of the hollows twice as deep as the others. I thought maybe due to the heat it might have been the Pi but I didn’t get a high heat warning & also have a fan in that unit. Today with a cool 30’C I tried V0.6.4 again running the dish file & had same issues. Finally I ran 2 of the files with UGS & it showed no issues. I’m going to revamp the files to try & save the folding wine table I was making & retest again with a fresh RPI OS & latest version.
UPDATE: I managed to set up a new OS & using Ver. 0.6.7, did up 3 files to salvage project & noted the following:

Further experiments in assigning shortcuts to macros: (1) I tried various macro names including special characters, with no change (they weren’t visible). I created 3 macros with simpified names [right10, right1, right0.1] with no luck. I tried deleting the check on/check off macros [which don’t work well in any case] and my 3 macros were visible! I then tried creating another macro [left10] but it was not added when i went back to the shortcut dialog.
This is just not reliable at this time, and I can’t find a real pattern to the problem.

Keyboard mapping seems to have gone off the rails.

I uninstalled 6.7 and re-installed 6.6. The problem persists in 6.6. Before installing 6.7, all my mappings worked perfectly.

I suspect if you want to change version, you might need to clean up that directory

I use the gSender on a Macbook Air. When the laptops screen goes dark and into sleep mode, the machine stops running, I did not have this issue with previous beta versions.

I just wanted to mention, that Using Shortcuts, when you have the MACRO TAB in focus , doesnt work.

at least from my experience.

I fully uninstalled 0.6.6 and deleted the gSender folders in ApplicationData in the USERS folder.

I created 5 macro’s and created shortcuts CTRL 1 - 5. and it all worked fine.
Except when I had the Macro tab open, all bets were off.

Just something for you to try.

Macro question! where are they stored?

Today, because of the problems people where having, I though I would be smart and clear out 0.6.6

When I launched 0.6.7 I noticed my macro’s where still in the UI.

so my question, is where is that info stored?

I just looked at the .sender_rc file and it appears to only contain the macros, not the keymap.

@KGN Tks, Kevin. I found them. I’ll write another report, as they are not functioning as they are written in the json file.

I have played more and found the following:

I have the “-” key on a wireless keypad mapped to Y-. The key mapping screen shows that is the case and the .json file does, too. However, tapping that key does not jog the Mill in Y-. Instead, it reduces the “xymove” and “speed” as indicated in those windows just below the jog screen. The presets for normal, rapid and precise are not changed.

Now I know for sure that the noise that I was hearing was simply because I had pressed the “-” key on the keypad enough times to reduce the step size and speed to very small values. The Mill was moving, just so little and so slowly that I could not see it move.

Hey folks - we’re attempting to fix an issue with the load file button not working. If you have time to go to the following link and follow the steps, it could hopefully help us resolve these issues!

Hey folks, We’re attempting to fix an issue where the load file button doesn’t respond for some users making the program unusable. Unfortunately it only affects a small portion of users, and we can’t recreate it across multiple computers we have at the office or at home. We’ve made an experimental build to hopefully track down the issue - it had a few changes to how the load file dialog is shown to force it to attach to the current window, adds more extensive logging to the electron handler, …

o reduce the step size and speed to very small values. The Mill was moving, just so little and so slowly that I could not see it move.

Could I get either a screenshot or a list of your keybindings for play/jog/etc. if they aren’t default to follow up on this? We’ve found an issue where keyboard ‘-’ and keypad ‘-’ being able to be set separately since they’re different keycodes but routing internally to the same action. Was hoping we could find a similar issue with your other non-working keybinds since default binds are working on our end.