I posted this in another thread but the thread was closed before I got an answer.

I am wondering if I am misunderstanding something with g sender. After I got everything redone and used g sender to check for square it was off by 1.22mm and it said to move the left side forward or the right side back, when I moved the left side forward and rechecked it I was 2.3mm out of square. This made no sense to me so this time I moved the left side back 3.53mm and checked it again and this time it came out to .02 but I had to move it in the opposite direction that g sender told me too. I’m I looking at something wrong?

@MikeH I apologize for closing your other thread prematurely, Mike. I read that you had solved your issue with getting your Mill squared.

I’ll leave this thread open to see of anyone can address it.

Just to keep the conversation going, keep in mind that the answer MAY be that, to the Mill, Y+ is toward the back of the table. Maybe the calibration tool is thinking the same way.

gwilki, that thought crossed my mind but I’m not sure. If that is the case there are going to be more than a few people that are going to get frustrated when trying to set up the LongMill with g sender. With luck someone on here will know the answer. It did work very well after I did the opposite of what it said.

Here’s to the adventure!

We’ll take a look at it for the next build - there might be an issue with the calibration code.

Thanks, but does that mean my MK2 is not at .02mm? That is the number g sender told me we were at after all was said and done. My guess is that is correct, I hope.

@MikeH another easy way to check is using the notches in the feet to measure the diagonals of the machine and compare those two numbers. That should be a good way to double-check that everything has been set up correctly 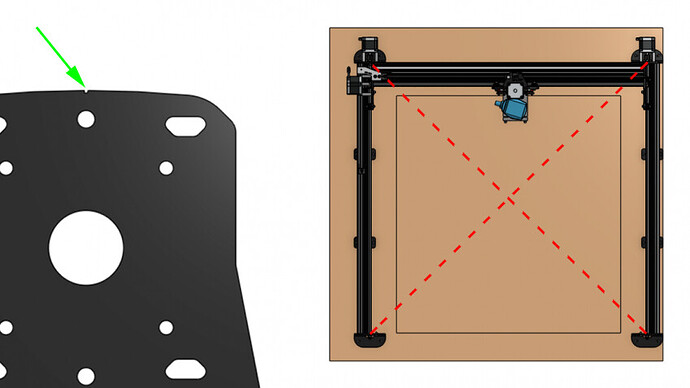 Do you happen to the original measurements that gave you either the 1.22mm or 2.3mm results on hand?

My MK2 is setup and running well, I don’t recall the numbers but what I do recall is the g sender calibration tool telling me to move the left side forward or the right side back and after I did that it was farther out of square. After several attempts I started thinking that the information g sender was telling me was backwards so I moved the unit in the opposite direction that g sender said and with a little tweaking it set up fine. I did measure the diagonal also and it to was spot on. So my issue, at least as I see it was g sender telling me to move it in the wrong direction. I would also highly recommend setting to unit up on skids. Not sure who first came up with that idea but I am glad they did. Another thing that might help is if they would cut a set of slots in the mounting hardware instead of 2 sets of screw holes on each end make one set slotted then there would be no need for skids. Just a thought.

Thanks for the report - we’ll have a fix for this in the next build. The tool was calculating the distance correctly but incorrectly reporting which direction the gantries had to be moved. We’ve corrected the message to be accurate based on the measurements provided by the user.

@MikeH I’m glad that you got things dialed in, Mike.

As Kevin has determined what needs to be changed in gSender, and as you have resolved your issue, I’m closing this thread. If anyone else has a similar concern, feel free to start a new topic, which will ensure that it is addressed promptly.