I set up the touch plate Probing on my home-built CNC Router running an Arduino using the A5 pinout and ground, to operate the probe and touch plate. I am having the probe sensing in the wrong direction it goes up instead of down when doing the probe cycle I have looked through the grbl settings I can’t seem to find out what is wrong I assume that the g code may have been corrupted somehow but don’t know how to correct it? Is there anyone who has had this happen? and how do you fix it?

@Neville Welcome to the group, Neville. There are many users with greatly varying degrees of experience, eager and willing to help.

Are you using the probe module in gSender? If not, what gcode sender are you using?

Hi Gwilki,
yes, I am using the gSender 0.73 which I downloaded from the main sienci site, and using the probe function on that.
It worked the first time I used it then it gave up on me Tomorrow I am going to rewire the whole probe section from the ground connection on the Arduino and the A5 connection in the hope that it is just a bad connection it has been suggested that I put a 1 k Resistor across the terminals as well as a 10 mF cap

Hi Grant ,
After checking and Tightening all the connections ,I now get a solid green light on the probe telling me that I have connection This may be as a result of the capacitor bridging the circuit I now get a error message of 4 and nothing moves so I am going to take the Cap out and check Again

Finally, I feel as though I am getting somewhere. After rewiring the probe circuit with new wires. I now get a solid green light on the screen while I am connecting the touch plate to the probe magnet. But the moment I disconnect the wire the red light comes back on. the blue Start probe is on. If I send it on it runs the cycle but in reverse? is the green Light supposed to stay on ?

I tried putting a capacitor in the line but the green light disappears in a few seconds I don’t know if this is what is supposed to happen and perhaps there is a grbl setting one can change ?

@Neville What does your probe setup look like? How, exactly, do you have it wired?
With no probe wires connected to the board, what she’s gSender show for your probe pin status? 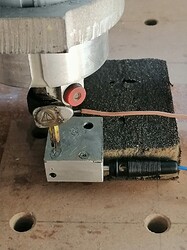 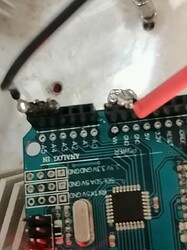 So it starts probing correctly and then retracts?
Definitely sounds like an electrical issue causing a false trigger on the probe pin.
Did you try probing with nothing plugged in to the arduino? (I know it won’t actually work…be ready to stop it)

Hi Neil,
Yes, I have tried that too, I even tried bridging it out and then trying, then I got a result where the machine won’t move at all.
I have ordered a new Arduino to try that too as I feel it might be a dry joint or corrosion on the board as the Arduinos, I have been using were in the machines in a slightly moist/high humidity place. We lived on the beach

and could cross the road too for a swim in the sea Although they were in enclosures.