Has anyone else had the shaft on the X-Axis motor breaking? I was in the middle of a cut when all of the sudden it cut right through the middle of it, I checked my X-Axis motor, took it off and noticed the shaft was broken. I dont know why. I normally run on soft wood with a speed of 48in/min (1200mm/min) is this too fast? 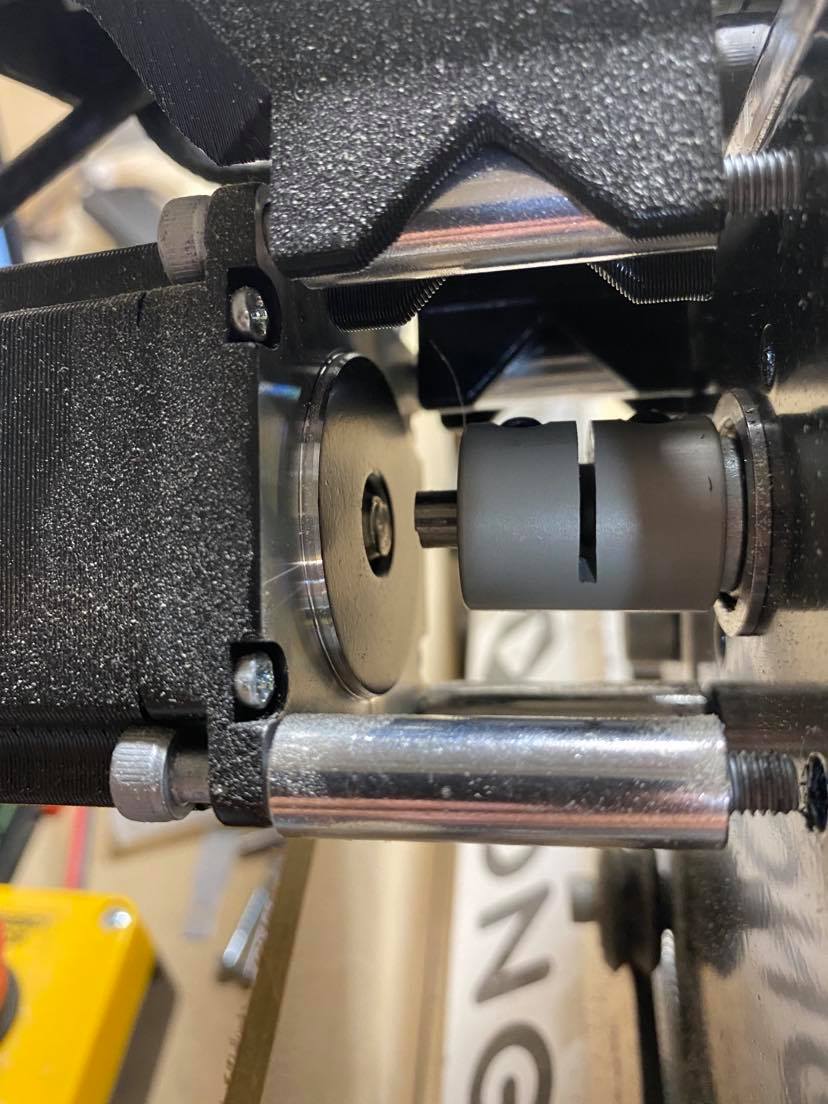 @Alex - That’s definitely not good. By any chance can you turn your lead screw by hand? Just curious if it is frozen. Trying to isolate the problem. Was it the motor shaft or the lead screw or a bearing?

One other person had a similar issue with a broken shaft. I think they decided there was probably a defect in the stepper motor shaft as the lead screw turned freely. I’m not sure if it was in the forum or on Facebook.

That was me, and I think there was one other person besides me as well.

Yes, the shaft broke in about the same place. I was asked by Sienci which batch my Longmill was in to see if there were other issues. My Longmill was batch 2, not sure about the other person.

Maybe want to send a note to Sienci about the shaft breaking. They can instruct you on ordering a new stepper.

I don’t remember what batch my longmill went out on but yes it broke at the shaft on the stepper motor. I already ordered a new set of motors but if it was bad they should send me new ones or refund my money. I will message them. Thanks

Yes the lead screw turns freely. No issues there.

Yes, mine broke about a month ago. Worst part was that it was after doing a laser engraving job that I noticed it, absolutely no load nor any fast movement (1200 mm/min) when it happened. Mine was from the Kickstarter batch, Sienci said it couldn’t have been a bad batch of stepper motors, but I’m starting to wonder now that we’re up to 3 that I know of.

@djgrant181 Dave, I know your machine was in the Kickstarter. Did you have the same coupler as @Alex? That was the one I had in Batch 2.

That coupler version failed on my machine about a month before the stepper shaft broke. The set screw threads on the shaft side ended up being stripped from trying to crank it down as tight as it would go - I was having slipping issues with the shaft - not the ACME rod - that was tight.

When the coupler failed, the stepper shaft was spinning inside the coupler. I wonder - in my case - if that torque was too much for the shaft - free spinning inside a tightened coupler. Seems like it wouldn’t be, which would imply some defect in the shaft as it broke right at the point where the shaft has the flat spot milled down.

I wonder is the shaft spinning inside the coupler caused it to be scored and this lead to the shaft breaking? Seems to make sense

Yeah that coupler, if I remember, had a rubber or plastic gasket or something between the two ends and the coupler separated and was moving left, back to the base of the shaft on the stepper. Seems like it could be. Not sure how long that was going on before the coupler actually failed.

The new couplers like in @Alex picture above is different than the ones I originally had and what is now being sold with the LM and in the store. What is above is what I now have that replaced the old coupler. https://sienci.com/product/6-35mm-to-8mm-coupler/

No, the shaft was not loose in the coupler. I checked that too. I’ve got another set of steppers coming from Sienci and one stepper motor from Amazon. I’m gonna try the Amazon one first and see how it does.

@stevendq & @Alex - I’m pretty sure my coupler is the same as yours, Alex. Looks like the ones they’re selling on the website at the link you posted, Steven. I don’t believe I had any slippage at all with the coupler, so no scoring that I could anticipate or detect

I don’t think that was my issue - I think it was a manufacturing defect, but I have no way of proving that

Sienci was very quick at getting me a new motor, replied almost immediately with the process I needed to follow to purchase a new motor.

Thank you everyone that replied to this post. I was worried that I had done something wrong but looks like it may be a manufacturers defect. I still have not brought this up with Sienci but I will this weekend. I did buy a stepper motor from Amazon and so far it’s working great. It was very easy to wire. image|375x500

Here is the link if anyone needs to get one in a pinch.
STEPPERONLINE Nema 23 CNC Stepper Motor 2.8A 178.5oz.in/1.26Nm CNC Stepping Motor DIY CNC Mill https://www.amazon.com/dp/B00PNEPF5I/ref=cm_sw_r_cp_api_fabc_DBWYFbRYA6N6E?_encoding=UTF8&psc=1

Mine broke too, no hard loads everything moves by hand easily. The shaft just snapped. Looks like it’s was not attached well. I took pictures and sent them to the guys. Bad time for this to happen with all my Christmas orders. Not good.

I posted the link to the stepper motor I bought from Amazon. It’s working great. Should help out if you need to run for the Christmas orders.

Thanks, already ordered it!

Just a small update about the motor shafts. Chris and I have been looking into why the motor shaft may be breaking. I would note that at this point we’ve shipped about 7000 motors and only have had reports of the motor shaft break with around 5-6 people so we haven’t had a lot of data to work with, plus in the overall scheme of things, this would make the motors a fairly reliable part since the defect rate is 0.008%. But since we are engineers we of course are a bit obsessive with stuff like this and for us to understand in the long term so we have some thoughts:

But in any case, if you have motor shaft issues, make sure to get in touch with us and we’ll work on figuring it out.

@andy Good information, Andy. All that said, is there anything current owners can do to head off potential breakages?